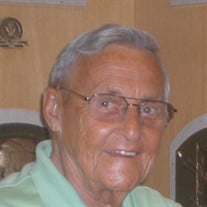 LENOX – William T. “Duke” Lahart, Jr., passed away on Friday, January 15, 2016 at Albany Medical Center after living life to the fullest for 86 years. Duke was born in Pittsfield on December 10, 1929, the son of William T. Lahart, Sr. and Mary Constance Peters. His greatest sense of pride came from being a lifelong resident of Lenox, a town he loved so much. Duke was beloved for his generous and fun-loving spirit. He was a 1948 graduate of Lenox High School, where he was a two-sport star. Duke played varsity baseball and basketball for six years at Lenox High. He was an All-Berkshire First Team basketball player but baseball was his favorite sport. For four consecutive years, Duke was selected as a First Team member of the All-Berkshire and All-Western Massachusetts teams. He finished in the top three for batting average in the Berkshire County League four years in a row. His Lenox High baseball team won the South Berkshire Championship three times and was crowned Berkshire County Champions in 1947. In 1948 and 1949, his Brass Rail team won the Pittsfield Junior City League title and finished in the top five of the All-American Baseball National Tournament in Johnstown, Pennsylvania. On September 1, 1950, Duke signed a professional baseball contract with the Philadelphia A’s and was assigned to the club’s minor league team in Kewanee, Illinois, before an injury ended his professional career. The Berkshire Eagle wrote about Duke at the time that he was “one of the greatest boys to ever come off the Lenox diamond.” In 2006, he was inducted into the UNICO Berkshire County Baseball Hall of Fame. Duke married Rosemary Monterosso on September 4, 1954 at St. Ann’s Church in Lenox. They raised their seven children on Plunkett Street. Duke loved watching all of his children play sports, particularly basketball, at Lenox High School. Duke was a licensed electrician. He began working for his father’s electrical contracting business, William T. Lahart & Son, Inc., in 1948. He then owned the business himself until 1993. Duke was a “fixture” at Tanglewood where he and his father did the electrical contracting work from the Festival’s inception. Duke’s three sons also worked closely with him at Tanglewood until his retirement. He served on the Lenox Savings Bank Board of Directors and was a volunteer firefighter for the Lenox Fire Department. Duke was an avid fan of the New York Yankees and the Boston Celtics. Winter trips to Florida, particularly by train, made him so happy. He also truly enjoyed spending time with his 18 grandchildren who loved their “Pop” so much. A communicant of St. Ann’s Church, he frequently volunteered his time to help the parish. He also was a Fourth Degree member of the Knight’s of Columbus. He is survived by his wife of 61 years, Rosemary Lahart of Lenox, his children and their spouses: William E. Lahart and Judith Lahart of Franklin, Massachusetts, Robert T. Lahart and Tammy Lahart of Lenox, Nancy (Lahart) Heydinger and Thomas Heydinger of Vernon, Vermont, Sharon (Lahart) Popeo and William Popeo of Kennett Square, Pennsylvania, Colleen (Lahart) Porth and Rick Porth of West Hartford, Connecticut, Cathleen (Lahart) Kinne and Kevin Kinne of Great Barrington, his sister Joan (Lahart) Mahoney of Lenox and his18 beloved grandchildren – Billy, Kelly, John, Adam, Bom Bee, Katy, Caroline, Tommy, Mary, Billy, Drew, Michael, Monica, Maria, John, Bobby, Allison and Lauren. He was predeceased by his son, Don Peters Lahart, who died on August 8, 1998 and his sisters Peggy (Lahart) Casey and Connie (Lahart) Clifford. FUNERAL NOTICE: A Liturgy of Christian Burial for William T. “Duke” Lahart, Jr. will be celebrated Wednesday, January 20, 2016, at 10 a.m. at St. Ann’s Church. Burial will follow in St. Ann’s cemetery. Calling hours will be held TODAY, Tuesday, January 19th from 4-7 pm at ROCHE FUNERAL HOME in Lenox. Donations in his memory may be made to Lenox Volunteer Fire Department in care of Roche Funeral Home. The family invites friends to share their memories of Duke on rochefuneralhome.com.

The family of Mr. William T. Lahart Jr. created this Life Tributes page to make it easy to share your memories.

Send flowers to the Lahart family.