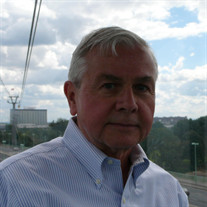 William Irvin, 77, of Pittsfield, passed away on Tuesday, October 24, after a long struggle with cancer. Bill Irvin was born and grew up in Little Rock, AR. After winning a scholarship to Notre Dame where he studied English and Russian literature, Bill went on to receive his Ph.D. in English from Harvard University. Teaching would be a lifelong passion, and while teaching at Emmanuel College in Boston, he also met Sheila Barksdale, who would become the great love of his life. They moved to Cleveland, OH, where Bill started teaching in the English Department at Cleveland State. He later taught at Barnard College in New York City. Gaining another degree in Administration from the City University of New York, he and his family moved to Pittsfield, where he first worked as the Coordinator of English, and then Curriculum and Testing Director for the Pittsfield Public Schools. After almost two decades in administration, he returned to the classroom at Lenox Memorial High School. He loved teaching at Lenox; he was part of their Humanities Program, teaching everything from Ancient Greek History to American Literature. He also spent time researching his family’s Scottish heritage, and his interest in Scottish culture, combined with his love of music, brought him to the Berkshire Highlanders, with whom he played the bagpipes. It also brought him and Sheila to Scotland, and to the ancestral Irvin home of Bonshaw Tower. Scotland was by no means the only place Bill and Sheila travelled. Bill embraced the adventure of travel after a trip to Paris, and he and Sheila traveled through France, Spain, Italy, Germany, Costa Rica, and most recently, Austria and the Czech Republic. Each place he would go, the first thing he would do is get a subway map to learn the city. Recently, Bill has been an active member of the Samuel Harrison Society, and has won grants to research the life of Pittsfield’s African-American minister, abolitionist, and intellectual. His research always involved uncovering the life and minds of the people he studied. In Harrison, Bill found a kindred spirit; Bill grew up in Arkansas during segregation, and was at Little Rock Catholic High School in 1957 when Central High School was desegregated by the Federal Government. As a Southerner, he saw the violence of inequality firsthand, and found in Harrison a voice that spoke eloquently about race, and the promise and work of unifying what Harrison called “people of different hues.” He even wrote a play about Harrison’s life, and had completed a collected works of Harrison, currently under review at University of Massachusetts Press. Bill leaves behind Sheila, his wife, and their children, Matthew, Margaret, and Catherine Irvin; he also leaves behind David Irvin and Lisa Irvin Ainsworth, children from a previous marriage, and one grandchild, Cole Ainsworth. Services: A mass of Christian burial celebrating Bill’s life will be held on Saturday, October 28 at 10:00 AM at St. Ann’s Church in Lenox. Calling hours will be on Friday, October 27 from 4:00-7:00 PM at Roche Funeral Home in Lenox, MA. In lieu of flowers donations may be made to Hospice Care of the Berkshires in care of the Roche Funeral Home, 120 Main Street, Lenox, MA 01240.

William Irvin, 77, of Pittsfield, passed away on Tuesday, October 24, after a long struggle with cancer. Bill Irvin was born and grew up in Little Rock, AR. After winning a scholarship to Notre Dame where he studied English and Russian literature,... View Obituary & Service Information

The family of Mr William Irvin created this Life Tributes page to make it easy to share your memories.

William Irvin, 77, of Pittsfield, passed away on Tuesday, October...

Send flowers to the Irvin family.