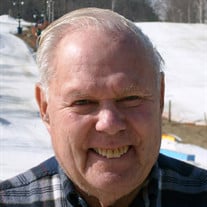 William “Bill” Gilbert, 89, formerly of South Egremont, died Monday evening at Berkshire Medical Center. For many years he was president and general manager of Catamount Ski Area in South Egremont MA/Hillsdale NY, Bill started his career in the skiing industry in the early 1950s as a snowmaker and operator of Fahnstock Ski Area in Harriman, NY and Silvermine Ski Area at Bear Mountain, both New York State Park ski areas. In 1960 Bill and business partners Don Edwards and brother Sandy Gilbert designed and built Sterling Forest Ski Area in Tuxedo, NY. In 1967 he co-invented the first airless snow machine and started his company Snow Machines International (SMI) In addition to being a pioneer in the snowmaking industry, he was the east coast and European distributor of Tucker Snow Cats. He was recognized for his commitment and contribution to the skiing industry in when 2006 he received the Ski Areas of New York Hall of Fame Award, and in 2009 he was presented with the National Ski Area Association’s Sherman Adams Lifetime Achievement Award. He was born in Brooklyn, NY on Dec. 30, 1926, the son of Morris and Florence Kirschman Goldberg. He served in the US Navy during WWII and earned a Bachelor’s degree in accounting from Syracuse University in 1952. He and his wife, Grace Cohan Gilbert, were married Sept. 9, 1951. Grace died Feb. 17, 2004. Bill is survived by a daughter, Patti Serden and her husband Scott of Beverly Hills, CA; a son, Tom Gilbert and his wife Beverly of Lenox; and grandchildren Kelli and Heather Serden, both of Los Angeles, CA and Matthew Gilbert of Lenox. He is also survived by his longtime ski business partner and good friend Don Edwards. A celebration of Bill’s life will be at Catamount Ski Area on Saturday April 16, 2016. In lieu of flowers, a donation in his memory may be made to STRIDE Adaptive Sports or the Michael J. Fox Foundation for Parkinson’s Research, both in care of the ROCHE FUNERAL HOME, 120 Main Street, Lenox, MA 01240.

The family of Mr William Gilbert created this Life Tributes page to make it easy to share your memories.

Send flowers to the Gilbert family.