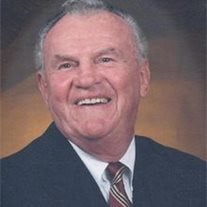 William G. Dunn of Kimball Farms Retirement Community in Lenox, passed away Wednesday, June 6, 2012 at the age of 86. Mr. Dunn, before moving to Kimball Farms in 2005, resided in South Lee, Jupiter, Fla., and also in Rye, N.Y. William G. Dunn was born June 9, 1925 to Loretta Kelly Dunn and William F. Dunn in Pittsfield, and was the grandson of Timothy E. and Margaret Dunn. As a third generation Lenox native, Mr. Dunn's grandfather, Tim, was the first Chief of Police in Lenox holding that position for 34 years and upon his retirement was believed to be the oldest police officer in the state on active duty. Mr. Dunn's father, William, was on the Board of Health and District Superintendent of the Metropolitan Life Insurance Company in Pittsfield, as well as serving as the Lenox Postmaster for a brief time and the Commander of the Lenox VFW. Shortly after graduation from Lenox High School in 1942, Mr. Dunn enlisted in the United States Marine Corp ending his service in Okinawa, the last major campaign of World War II in 1945. He then started his freshman year at University of Massachusetts and graduated with a BA in English in 1950. His career began at Life Magazine in 1951 which was followed by Haywood Publishing and then McCalls magazine as National Advertising Sales Manager until 1968 and then as VP of Marketing at Magazine Publishing Association. His next and last positions were at USNews and World Report, firstly as the VP of Advertising Sales Manager and secondly, as the magazine's Publisher in 1978 until his retirement in 1985. He also served on the Tenants Board of Management of Rockefeller Center, where his office was located. During this time as a Publisher, he was awarded an honorary doctorate of Public Service from his Alma Mater, the University of Massachusetts in 1981. A veteran of 35 years in the New York publishing business, his achievements were notable and significant. In the years following his retirement, Mr. Dunn was an adjunct professor of Journalism at UMass Amherst and then served as President of the Stockbridge Golf Club from 1990-1992 and remained on the Board of Directors for a number of years. Concurrently, he was on the Board of Directors of Berkshire Health Care Systems from 1992-2006 and was instrumental in the establishment of the Kimball Farms Community. In his retirement, Mr. Dunn was an avid golfer with memberships at the Westchester Country Club in Rye, NY; Pittsfield Country Club; Jonathan's Landing in Jupiter, Fla.; and the Stockbridge Golf Club. Mr. Dunn raised his family of three daughters; Kathleen Dunn Rogers (Richard) of East Brunswick, N.J.; Patricia Dunn Fitzgerald (Thomas) of Wilton, Conn., and Lee; and Nancy Dunn Storck (Patrick) of Amston, Conn., and Rye, N.Y. The Dunn 's lovingly restored and renovated their South Lee carriage house in 1988, which they had owned since 1978, in order to come home to the Berkshires to retire. His daughters survive him along with his three grandchildren; Kristen Rogers, William Rogers and Maggie Storck and seven nieces and nephews. Mr. Dunn was predeceased by his sister, Margaret Davis in 1972 and his brother, Raymond in 2010 and his beloved wife, of 56 years, Marjorie in 2009. FUNERAL NOTICE: A Liturgy of Christian Burial for Mr. William G. Dunn will be Monday, June 11, 2012 at 10 a.m. at St. Ann's Church, Lenox, celebrated by the Rev. Christopher J. Waitekus, Pastor. Burial with full military honors will follw in St. Ann's Cemetery. Calling hours will be held at the ROCHE FUNERAL HOME on Sunday, June 10 from 4 to 7 p.m. The family asks that donations in Bill's name be made to the Lenox Police Department or St. Ann's Church, both in care of the funeral home, 120 Main Street, Lenox, MA 01240.

The family of Mr. William G. Dunn created this Life Tributes page to make it easy to share your memories.

Send flowers to the Dunn family.