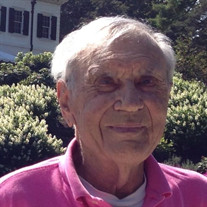 Obituary for Willard Martin Salzer Willard M. Salzer, 92, of Lenox, MA, formerly of Norwalk CT. and Naples, FL. passed away peacefully on February 10, 2018 at Kimball Farms Nursing Care Center. He was born in the Bronx, NY on February 23, 1925, the middle son of Morris and Ethel Salzer. He spent his early years in Spring Valley, NY before moving to Denver, CO with his family, where he graduated from East High School. His studies at the University of Colorado in Boulder were interrupted by World War II. He served in the Navy from 1944-1946 as a radar technician, stationed in the Aleutian Islands. He returned to the University of Colorado on the GI bill where he finished his B.A. and received an M.A. in philosophy, with a focus on economics. Will began his career as an economist with the US Labor Department in Washington, D.C. and the Federal Reserve Bank in San Francisco. Most of his professional life was at Allied Stores Corp. in NYC, where he became Vice President for Planning and Research and a nationally known authority on retail store location. In his later years, he pursued his interest in teaching and taught market research and business administration at Florida International University and Regis University. In San Francisco, Will met the love of his life, Judy Freilich. They married in 1953 and spent 58 wonderful years together, primarily in Norwalk, CT., where they raised their family. He was an adoring and kind father to his three daughters. Will loved cars and was the unofficial consultant to family and friends for their automobile purchases. He enjoyed tennis, golf and listening to classical music. He was active in his community, and ran for the office of CT. state representative in 1994. He was known for his sense of humor, mischievous behavior, and optimism. Despite serious health challenges in his later years, he met each day with a passion for life and a resilience that was an inspiration to all around him. He is survived by his three loving daughters, Nancy Salzer of Arlington, MA, Jan Salzer – Ogden of Lanesborough, and Susie O’Donohue of Naples, FL.; his son-in-law Elton Ogden; and 5 grandsons – Gabe Salzer, Zachary and Benjamin Ogden, and Jamie and Cory O’Donohue; his sister-in-law, Carolyn Levin and brother-in-law, Arthur Freilich, and nieces and a nephew. He also leaves behind many dear friends from Norwalk, Denver, and Naples, FL. Besides his parents, he was predeceased by his wife Judy, and his two brothers Chester and Syril. In Lenox calling hours will be Tuesday February 13, 2018 from 9:00-10:30am at Roche Funeral Home, 120 Main Street in Lenox, MA. In Norwalk, burial service will take place on Tuesday, February 13, 2018 at 2pm, at the Independent Hebrew Society Cemetery, 135 Richards Avenue, Norwalk, CT. The family would like to thank his beloved caregiver, Debbie Haskell, the wonderful staff at Kimball Farms NCC and at the BMC Renal Dialysis Unit, and the van drivers at BRTA for their kindness. In lieu of flowers, memorial donations can be made to the Friends of Renal Dialysis, in care of the funeral home.

The family of Mr Willard M Salzer created this Life Tributes page to make it easy to share your memories.

Send flowers to the Salzer family.