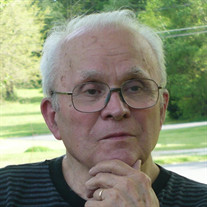 William “Bill” Bell, Jr. died peacefully on Wednesday, November 11, at Fairview Hospital in Great Barrington. The eldest son of William F. Bell, Sr. and Edna Craig Bell, Bill was born in Otwell, Indiana on February 9, 1927. He served twice in the Navy, during World War II and the Korean War. Bill graduated from Indiana University in 1948. In 1950, he married Sarah “Sally” Haglind Bell from Howe, Indiana, who graduated from IU in the same year. Bill and Sally moved to Howe, where Bill taught school for two years, and worked as a reporter and wire editor for the Sturgis (Mich.) Journal. In 1955, the Bell couple moved to the Berkshires, settling first in Adams, and then moving to Lenox in 1963. Bill worked as a reporter at the North Adams Transcript for four years, and then as head of the technical writing section at Sprague Electric for four years. Bill was hired by the Berkshire Eagle in Pittsfield in 1963, serving for a year as Lee bureau chief, and then as assistant city and county editor at the Eagle’s main office in Pittsfield. In 1971, he was promoted to city editor. He continued in the role for 19 years, until the Eagle’s city and county staffs were combined, and he became overnight news editor. He was widely respected by colleagues for his journalistic skills, fair-mindedness and unflappability. “Bill could edit copy during an air raid,” according to former Eagle colleague Stephen Fay. Bill retired from the Eagle in 1992, but continued to write a religion column for five years that appeared in the Eagle and four other papers in the Eagle publishing group. Bill and Sally travelled nine times to France together, greatly enjoying the country’s landscape and historic churches. In 2012, Bill won the Richard Wilbur Prize for his first book of poems, The Picnic in the Rain, which was published by the University of Evansville Press. He wrote, compiled and completed a second book of poems from throughout his writing career, Facing Mount Greylock, that is forthcoming from Off the Common Books. Bill was predeceased by his wife Sally in 2013, and his brothers Father Jude Bell (born Roger Craig Bell) of Three Rivers, MI in 2019 and Richard A. Bell of LaGrange, IN in 2014. He leaves four children: James H. Bell, of Lenox; Charles W.F. Bell of Ossining, NY (married to Gina Bell); Philip Chapman-Bell of Northampton (married to Marcy Chapman-Bell); and Sarah E. Bell of Lewisburg, PA (married to Loren Gustafson); and two grandchildren, Max and Lucy Gustafson. The family attended worship services at St. Helena’s Chapel in New Lenox; the Vineyard Community at Cranwell; and now at St. Ann’s Church in Lenox. FUNERAL NOTICE: A Liturgy of Christian Burial will be celebrated Tuesday morning at 11 a.m. at St. Ann's Church by Msgr. John Bonzagni. Burial will follow in St. Ann's Cemetery. Calling hours will be Tuesday from 9:00 AM to 10:30 AM at the ROCHE FUNERAL HOME. In lieu of flowers, memorial gifts may be made to St. Gregory’s Abbey (Three Rivers, MI), in care of the funeral home, c/o 120 Main Street, Lenox, MA 01240.

The family of Wiiliam "Bill" Bell Jr. created this Life Tributes page to make it easy to share your memories.

Send flowers to the Bell family.