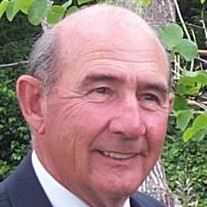 Wesley S. VanAlstyne, 86, of Sun City West, AZ., died peacefully on February 28, 2019. Born on December 4, 1932 in Great Barrington, MA., to the late Sears R. and Mary U Barnes VanAlstyne, he attended elementary schools in Housatonic and Stockbridge and was a 1950 graduate of Lenox High School. He graduated in 1978 with a degree in Business Management from North Adams State College. After college, Wesley graduated from the General Electric Toolmaker Apprentice Program in 1954 and their manufacturing Management Program in 1961. Mr. VanAlstyne began working at General Electric Co. upon graduation from high school, and worked there for 39 years, retiring in 1989. His General Electric career included a number of managerial positions in several General Electric locations. At the time of his retirement, he was a Project Manager for Computer Systems Development in GE’s Ordnance Systems Department. After retiring from GE, he worked several years as an independent consultant, designing computer system applications. He served in the US Army during 1954 & 1955, followed by 6 years of Army Reserve Duty. Wesley was an active volunteer for many years in the Lenox Town affairs, including participation in various school evaluation committees, and as president of the Lenox Memorial High School Booster Club. He was appointed to serve on the Town Finance Committee in 1983, and chaired that committee for 4 of his 6-year term through 1988. In 1989, he was appointed to the Department of Public Works Board for an interim term, and in 1990, was instrumental in forming the Capital Improvements Committee, and served as that committee’s Chairman for 2 years, initiating the Town’s Long-Range Capital Plan. He and his wife were avid golfers. After his retirement, they traveled extensively, playing golf in many ports-of-call. They also enjoyed ocean and river cruises, taking many such journeys, both here and abroad. After spending their early life in Western Mass, they relocated to Sun City West, AZ in 1997. Wesley was a member of the Greenock Country Club in Lee, MA., for many years, a member of the ELFUN, where he frequently volunteered for community service projects, a member of SCW Woodworking, Computers, Sportsman, and Theatre West Clubs. Wesley was married to the former Nanette T. Coco for 55 years. She pre-deceased him in 2009. Mr. VanAlstyne is survived by his children; Deborah J. Cahill of Chantilly, VA., Kathryn M. Engel (Steven) of Star, ID., Wesley S. VanAlstyne, Jr. (Kathleen) of Raleigh, NC., grandchildren; James Cahill, Joseph Cahill, Chad Saar, Nicholas VanAlstyne, and Ashley VanAlstyne Foodman, great-grandchildren; Sean, Molly, and Kinley Cahill (Joseph and Katie), Daniel Cahill (James and Melanie), and Logan Foodman (Ashley and Ben), siblings; David VanAlstyne (Jeannette) of Lenox, Miriam Smith (Merrill) of Raleigh, NC., Phyllis Miller (Donald) of Lenox Dale, Patricia Plue (Andrew), Susan Halpin, and Beverly Krol (John) all of Pittsfield, sister-in-laws; Eleanor VanAlstyne of Pittsfield, Patricia VanAlstyne of San Tan Valley, AZ, and Barbara VanAlstyne of Lenox Dale, and his longtime, faithful friend, Nancy Keys of Sun City West, AZ. Besides his wife and parents, he is pre-deceased by his brothers; Charles, Sears, and Thomas VanAlstyne and his nephew, David VanAlstyne. A small service will be held at Camino Del Sol Funeral Chapel in Sun City West, AZ., for his immediate family. A memorial service and burial will be held in Lenox at a later date in the Spring.

The family of Mr Wesley VanAlstyne created this Life Tributes page to make it easy to share your memories.

Send flowers to the VanAlstyne family.