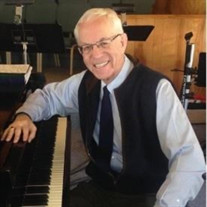 Wesley A. Ross died on November 22, 2021, at his home in Lenox, MA after an eight-year battle with Multiple Myeloma. He was born in Portsmouth, NH on November 14, 1946. He obtained a BA in Theology from Berkshire Christian College in 1968 and MA of Music from the University of Massachusetts in 1975. As an accomplished musician and well-known leader in his church denomination, Wes led music at camp meetings, conferences, and church gatherings around the country. For 18 years he chaired the Music Department of Berkshire Christian College in Lenox, MA, where he also directed the college choir, and led them on many tours of the East coast and two tours of the UK. Wes served as the chairman of the latest Advent Christian hymnal, “Hymns of Heritage and Hope”. His interest in hymnology took him on many trips to the UK to engage in hymn research, in addition to hosting three hymnology tours there. Wes also co-hosted 15 trips to Israel, Egypt, and Jordan as a part of his position as Vice President of the Berkshire Institute for Christian Studies (Lenox, MA) where he served from 1988 to 2019. As a composer and arranger, he led the worship music from the keyboard and piano at Hope Church in Lenox, MA, where he served as Minister of Music and Worship from 1978 to 2021. Wes greatly enjoyed golfing with family and friends, mowing the lawn, and working in the yard. Wes leaves his wife of 53 years, Suzanne Ross of Lenox, MA, three children: Kristin Ross of North Augusta, SC, Jamie Ross of Mound, MN, and Andrew Ross (Jennifer) of Chattanooga, TN; four granddaughters: Lizzie, Julia, Caroline, and Margot Ross of Chattanooga, TN; three, brothers: David Ross (Shirley) of Hickory, NC, Brent Ross (Janie) of Loganville, GA, and Steve Ross (Deb) of Albany, NY, and many nieces and nephews. Calling hours will be held at Hope Church in Lenox on Friday, December 3 from 4 to 6 PM, with the funeral at Hope Church on Saturday, December 4 at 10 AM. In lieu of flowers, the family requests donations be made to the Berkshire Institute for Christian Studies, PO Box 1888, Lenox, MA 01240.

Wesley A. Ross died on November 22, 2021, at his home in Lenox, MA after an eight-year battle with Multiple Myeloma. He was born in Portsmouth, NH on November 14, 1946. He obtained a BA in Theology from Berkshire Christian College in 1968... View Obituary & Service Information

The family of Mr. Wesley A. Ross created this Life Tributes page to make it easy to share your memories.

Send flowers to the Ross family.