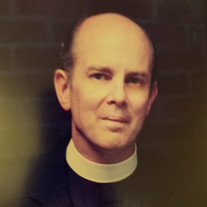 LENOX, MA – The Very Reverend Walter Hamilton Taylor, 79, died on December 2, 2017 under the care of hospice. He died at Kimball Farms Nursing Care Center with his wife, Mary, at his bedside. Taylor was born in Cincinnati, Ohio on January 27, 1938 to Robert W. Taylor and Jane Margaret Roe Taylor. He was a Magna Cum Laude and Phi Beta Kappa graduate of Kenyon College and earned a Masters of Divinity Degree with Honors from Virginia Theological Seminary. He was also awarded an honorary Doctorate of Divinity Degree from Berkeley Divinity School at Yale University. Taylor’s ministry focused on pastoral care and creating a supportive church community in which lay leaders were empowered to act and be successful in their ministry. He began his career as the Assistant Rector of Christ Church in Cincinnati, OH. He then served as the Rector of Holy Trinity Episcopal Church in Oxford, OH, Trinity Episcopal Church in Columbus, OH. and St. Luke’s Parish in Darien, CT. He concluded his professional career as the Dean of Christ Church Cathedral in Houston, TX until his retirement in 1999. Significant contributions of his ministry include his commitment to urban ministry and social justice in Columbus, OH. This focus of his ministry continued in Darien, CT with his commitment to Person-t0-Person, a social service organization within St. Luke’s Parish, his involvement in helping revitalize The St. Luke’s Community Services in Stamford, CT, and leadership with others in helping establish the Stuart McKinney House, the first AIDS residence in the state of Connecticut. In Texas, Taylor helped foster the creation of New Hope Housing which pioneered the approach in Houston of using single-room occupancy housing coupled with intensive counseling and employment support services to help solve chronic homelessness among city residents. Upon retirement, Taylor resided in Lenox, MA and Key West, FL. During retirement, he served as a consultant for Episcopal Health Charities of St. Luke’s Episcopal Hospital in Houston, TX and the Episcopal Church Pension Fund. He and his wife, Mary, also worked for the Episcopal Church Pension Fund as facilitators of the Planning for Tomorrow Conferences that were designed to help Episcopal clergy plan and prepare for retirement. Taylor was the part-time Winter Associate at St. Paul’s Episcopal Church in Key West, FL. Taylor served on the Boards of Central Houston, Inc., The Downtown Houston Association, and the Berkeley Divinity School at Yale. He was also a member of St. Paul’s Episcopal Church in Stockbridge, MA, The Mount, The Lenox Club, and Delta Tau Delta Fraternity. Taylor’s personal passions included his family, gardening, reading, traveling, attending concerts at Tanglewood, and walking the trails in Kennedy Park in Lenox with Mary. Taylor is survived by his wife of 57 years, Mary Wilson Taylor, of Lenox, MA. He is also survived by his sons William Wilson Taylor (Bill) of Pawling, NY and Peter Hamilton Taylor of Great Barrington, MA; his daughters-in-law Jennifer Luce Taylor and Stephanie Hertig Taylor; his grandchildren Wilson Taylor (Alicia Taylor) of San Francisco, CA, Allyson Taylor of Santa Fe, NM, Paige Taylor and Jane Taylor of Great Barrington, MA; his brother, Robert Taylor of Beaufort, SC.; and many nieces and nephews. Taylor was predeceased by his parents and his brothers, Stephen and Richard Taylor. There will be a celebration of the life of Walter Taylor at St. Paul’s Episcopal Church in Stockbridge, MA on Friday, December 15, 2017 at 2:00 p.m. In lieu of flowers, donations can be sent to Hospice Care in the Berkshires.

LENOX, MA &#8211; The Very Reverend Walter Hamilton Taylor, 79, died on December 2, 2017 under the care of hospice. He died at Kimball Farms Nursing Care Center with his wife, Mary, at his bedside. Taylor was born in Cincinnati, Ohio on January... View Obituary & Service Information

The family of Rev Walter Hamilton Taylor created this Life Tributes page to make it easy to share your memories.

Send flowers to the Taylor family.