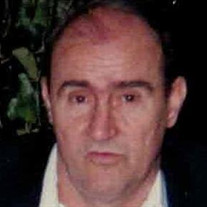 Thomas J. Verchot died on Saturday, February 20, 2016, following a brief but courageous battle with cancer. Tom died in the close company of his loving family. Tom was 82 years old, the son of Vera Miller Verchot and Oscar Verchot, born in 1933 in Pittsfield, and attended schools in Pittsfield and Lenox. Tom was married to his soulmate Mary Parker Verchot for forty three years and they were married in Lenox. Tom was last employed by Rising Paper in Housatonic and worked there until he retired in 1997. Tom was predeceased by his wife Mary, sisters June M. Scarinizi of Hugo, Colorado, Sylvia Kabfleisch of Rancho Palos Verdes, CA, and his brother Gerald Verchot of Lenox. Tom leaves his sister-in-law Maria Verchot of Lenox, his three nieces, Susanna Kelly of Pittsfield, Deborah Sykes of St. Mary, PA, and Diane Phillips of Lanesboro. Tom also leaves several great nieces and nephews, and his close friend Barbara Sibley. Tom was an enthusiastic follower of horse racing events and also enjoyed going to the casinos with his wife Mary. Tom is known by his family as a person who enjoyed the simpler things in life. Family, friends and neighbors knew they could count on his unselfish heart. As wished by Tom, there will be no services, and burial will be private. The family would like to thank the members of Hospice Care in the Berkshires who provided amazing care to Tom, and allowed him to be with family during this period of his life. The family request that memorial donations in memory of Tom be made to Hospice Care in the Berkshires in care of the ROCHE FUNERAL HOME, 120 Main Street, Lenox, MA 01240.

The family of Mr Thomas J Verchot created this Life Tributes page to make it easy to share your memories.

Send flowers to the Verchot family.