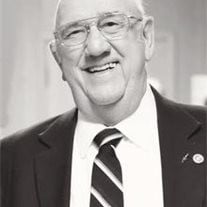 Thomas W. Van Alstyne, 76, of Lenox Dale, died suddenly Thursday, January 30, 2014, at Fairview Hospital in Great Barrington. Born in Great Barrington December 30, 1937, the son of Sears R. and Mary Una Barnes Van Alstyne, he attended Lenox Public Schools and was a 1956 graduate of Lenox High School. Thomas served in the US Army and later the Army Reserves from 1956 until his Honorable Discharge January 22, 1963. He was hired as the first employee in 1961 for a new venture, Lenox Machine Company in Lenox Dale, which later became Beloit Lenox, where he worked as their Service Manager at his retirement. One of Thomas' most endearing qualities was his giving nature; he was a consummate volunteer. Thomas was a member of the Church on the Hill and served as a member of their Deaconate and Board of Trustees. For many years he was Scoutmaster for Troop #53, Boy Scouts of America, in Lenox Dale. He was recently recognized for 50 years of Membership to the Evening Star Masonic Lodge in Lee where he served as treasurer from 1993-2008. He enjoyed camping and traveling with his family, was an avid woodworker, and golfer. He was a master handyman, always willing to help out anyone with any project. His joys in life were his family and friends. His five grandchildren were the light of his life. Thomas and his wife, Barbara Howes Van Alstyne, recently celebrated 54 years of marriage, having been wed at the Church on the Hill in Lenox on October 24, 1959. Besides his wife of Lenox Dale, he is also survived by two sons; Lt. Col. (Ret.) Thomas W. Van Alstyne, Jr. and wife Ellen of Steilacoom, WA, and Glenn R. Van Alstyne of Chatham, NJ; one daughter, Donna V. Burke and husband Patrick of Lunenburg, MA; grandchildren Andrew, Stephen, Richard, Taylor, and Kyle; brothers Wesley S. Van Alstyne of Sun City West, AZ and David A. Van Alstyne (Jeannette) of Lenox; sisters Miriam Smith (Merrill) of Raleigh, NC, Phyllis Miller (Donald) of Lenox Dale, Patricia Plue (Andrew) of Pittsfield, Susan Halpin of Pittsfield, and Beverly Krol (John) of Pittsfield; sister's-in-law Eleanor Van Alstyne of Pittsfield and Patricia Van Alstyne of Queen Creek, AZ; and many nieces and nephews. Besides his parents he was pre-deceased by his brothers Charles and Sears Van Alstyne, his nephew David A. Van Alstyne, Jr., and sister-in-law Nanette Van Alstyne. A celebration of the life of Mr. Thomas W. Van Alstyne of Lenox Dale will be conducted Monday, Feb. 3, 2014, at 1:30 PM at the Church on the Hill in Lenox. Burial will follow in Mountain View Cemetery. Calling hours at the ROCHE FUNERAL HOME in Lenox will be Sunday, Feb. 2, from 1-4 pm. In lieu of flowers donations in Thomas's memory may be made to the Church on the Hill or Evening Star Masonic Lodge, both in care of the funeral home, 120 Main Street, Lenox, MA 01240.

The family of Thomas W. Van Alstyne created this Life Tributes page to make it easy to share your memories.