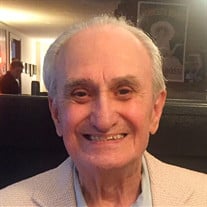 Lenox - Theodore Charles Metros, 90, of Lenox died August 4th at Kimball Farms Nursing Care Center. Born on August 27, 1927 in Cambridge, MA to the late Charles T. and Emily Metros. At the age of 17, Ted left high school and joined the United States Navy and served during WWII. He was honorably discharged in 1946. Upon his return home from the war, he finished high school in 1947 at Rindge Technical School. Ted worked at Cole Hersee in South Boston, as an Engineer while attending college in the evenings, graduating from both Suffolk University and Northeastern University. He was a communicant of St. Athanasius in Arlington, MA until his relocation to Lenox, MA and St. Nicholas Orthodox Church in Pittsfield. Ted married Helen T. Metros on June 15, 1953 in New Hampshire. He enjoyed spending time with family, outings with his wife Helen, and dancing. Besides his wife, Helen of Lenox, he leaves his children; Emilie Goudey (Richard) of Lenox, Charles Metros of Arlington, MA, grandchildren; James Goudey (Diana) of Fort Worth, TX., Lisa Goudey of Lenox, MA, Deanna Metros of Attleboro, MA., Elyse Metros of Braintree, MA., a great-grandson; Kosta Goudey; and a sister; Zoe Colt of Belmont, MA. The funeral service for Mr. Theodore C. Metros will be held on August 16, 2018 at 12:30pm at St. Nicholas Orthodox Church in Pittsfield with Rev. John Mikitish, officiating. Burial will be held August 17, 2018 at 11:00am in Mount Auburn Cemetery in Cambridge, MA. In lieu of flowers, donations in Ted’s memory may be made to either the Life Enhancement Program at Kimball Farms or St. Nicholas Church both in care of the Roche Funeral Home, 120 Main Street, Lenox, MA 01240.

The family of Mr Theordore C Metros created this Life Tributes page to make it easy to share your memories.

Send flowers to the Metros family.