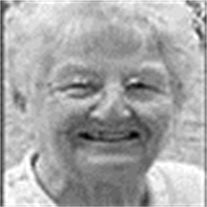 Shirley M. Vincelette, 88, of Derry, N.H., a 60 year resident of Lenox, died peacefully Friday afternoon at Parkland Medical Center in Derry surrounded by her loving family. Born in Pittsfield on Apr. 26, 1926, the daughter of Earl E. and Grace Blessing Turner, she attended Pittsfield schools and was a 1944 graduate of Pittsfield High School. After joining the Army Cadet Nursing Corps she graduated from St. Luke's School of Nursing in 1947 as a registered nurse. Mrs.Vincelette was the School Nurse for the Lenox Memorial High School for 18 years where she passionately cared for and advocated for all students within the school. Before accepting the position of school nurse she started her nursing career working at Hillcrest Hospital from 1947-48 and later was employed by Blue Cross/Blue Shield, GE Ordnance Insurance Division, and the medical office of pediatrician Dr. George Porter. During her tenure as School Nurse she was an active member of the Massachusetts School Nurse Association where she served as treasurer and then president. She advocated for nurses across the state to increase their pay and to recognize the School Nurse role as a professional position within the school system. Her work was recognized and honored in 1988 with the Massachusetts School Nurse of the Year Award. She was a long time communicant of St. Ann's Church in Lenox and was a member of the Catholic Daughters of America and was a past Grand Regent. She was also a member of St. Luke's School of Nursing Alumni Association. On Dec. 27, 1948, Shirley married William J. Vincelette at St. Joseph's Church in Pittsfield. They enjoyed 62 years of marriage. During their retirement they took many road trips traveling coast to coast including Florida, California and Alaska. More recently they spent their winters in Florida swimming and golfing, summers in Alaska with their daughter's family and the rest of the year in Lenox at their home enjoying family and lifelong friendships with those in the community. They also traveled frequently to Derry, N.H. to spend time with the rest of the family. She is survived by her three daughters; Nancy J. Fletcher and her husband, James; Sue Ellen Van Nostrand, both of Derry, N.H., and Julie G. Stinson and her husband, Robert of Anchorage, Alaska; grandchildren; Joanne Balentine of York, Maine and her husband, Paul, Andrea Fletcher of Portland, ME, William J.V. Fletcher of Baltimore, Md. and his wife, Melissa Oleson, Michael Van Nostrand of Tewksbury, Mass. and his wife, Courtney, Katherine Van Nostrand of Derry, N.H. and Samuel K. Stinson of Anchorage; a brother Robert Turner and his wife, Connie of Brunswick, Maine; and her sister-in-law, Helen Turner of Peru, N.Y.; two great grandsons Andrew and Matthew Balentine and five nieces and one nephew. Besides her husband she is predeceased by her parents, her brother, Earl E. Turner, Jr and her son-in law, Ralph J. Van Nostrand. FUNERAL NOTICE: The funeral of Mrs. Shirley M. Vincelette, will be Friday, Sept. 5, 2014, at 9 a.m. from the ROCHE FUNERAL HOME followed by a Liturgy of Christian Burial at 10 a.m. at St. Ann's Church celebrated by the Rev. Christopher J. Waitekus, Pastor. Burial will follow in St. Ann's Cemetery. In lieu of flowers donations in in Mrs. Vincelette's memory may be made to Vincelette Health Career Scholarship Fund in care of the funeral home, 120 Main Street, Lenox, MA 01240.

The family of Shirley Vincelette created this Life Tributes page to make it easy to share your memories.

Send flowers to the Vincelette family.