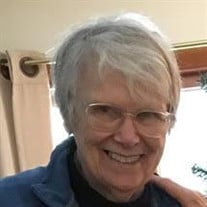 Sheila Barry Wessel, 77, of Pittsfield, Massachusetts passed away Thursday, March 22, with her devoted husband, Michael Wessel, and her two beloved daughters by her side. Throughout her life, Sheila was a quick-witted, wry woman with a fiery spirit in everything she was involved in. Sheila was born in Lowell, Massachusetts in 1940, the daughter of Paul and Angel Finnegan. She was a graduate of Saint Patrick's High School in Lowell, held a BA from Emmanuel College in Boston, and a Master's in Educational Administration from North Adams State College. Of the many theme's in Sheila's life, she worked fearlessly to help the underrepresented. At age 17 she entered the Roman Catholic religious order of the Sisters of Notre Dame Namur. As a young nun, she taught in various parochial schools in Boston. She did social work in Boston's poorest neighborhoods, advocating for education equality, including placing minority students on scholarships in private schools. After thirteen years of service, post Vatican II, she left the Order. She subsequently married Eugene Barry in 1971 and they relocated to the Berkshires. They had two daughters, Jennifer and Elizabeth. The family settled in Pittsfield where Sheila worked in public housing as the General Manager for Berkshire Housing. She later managed the Williamstown Housing Authority. In the 1970s Sheila was appointed as the first Community School Coordinator at the Morningside Community School. Following the death of an abused young boy, Sheila helped push for the state law mandating the reporting of child abuse. Sheila was passionate about women's rights. She became Executive Director of the Women's Services Center in Pittsfield founded in 1974 (now the Elizabeth Freeman Center). Her vision and drive put the Center on a firm financial and administrative footing that allowed the small grassroots organization to sustain the mission which lives on today. In later life Sheila's commitment to education and equality continued. At age 62, she joined Americorps in South Boston where she directed a diploma program for high schools drop-outs. When she returned to the Berkshires, she volunteered as an adult literacy tutor locally and taught writing at both North Adams State College (now MCLA) and Berkshire Community College as an adjunct professor. Creative Expression was an important part of Sheila's life. She was a writer, with short stories published in the Berkshire Revue, a poet and a playwright producing her own works. She was the co-founder of the Calliope Theater in Williamstown. She thought of herself as an artist and created many fine abstract paintings. During a long recovery from an ankle injury she became adept at embroidery and quilting adding to her craft of crocherting. Sheila found peace at the water. Some of her favorite places to be were the beaches of Maine and the little cottage above Pontoosuc Lake where she lived for a time. In that spot on the hill, she would marvel at the peaceful views of the water from every window. She leaves her loving husband of ten years Michael Wessel, her beloved daughters Jennifer Barry and Elizabeth Morgan, her precious granddaughter Hazel Irene Morgan, her son-in-law Rob Morgan, and her former husband Eugene Barry. Besides her immediate family, Sheila is also survived by her extended family of 40 plus years, the Vanhoenackers, the Langmans and the Nolans. For all who loved Sheila, the fond memories of her devilish sense of humor and non-conformist sensibilities will live on. FUNERAL NOTICE: a memorial service for Sheila Wessel will be held at the Unitarian Universalist Church on Wendell Avenue on a date to be promulgated. Those wishing to make contributions in her name in lieu of flowers may give to St. Jude's Hospital for Children (www.stjude.org/Donate) To share memories and stories please visit rochefuneralhome.com

Sheila Barry Wessel, 77, of Pittsfield, Massachusetts passed away Thursday, March 22, with her devoted husband, Michael Wessel, and her two beloved daughters by her side. Throughout her life, Sheila was a quick-witted, wry woman with a fiery... View Obituary & Service Information

The family of Mrs Sheila Wessel created this Life Tributes page to make it easy to share your memories.

Send flowers to the Wessel family.