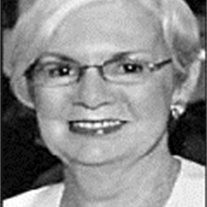 Sarah Ross Hall, 70, of Lenox, passed onto the Lord on July 19, 2014, after a brief illness. Sarah was born on Oct. 28, 1943, at West Hudson Hospital in Kearny, N.J. She was the loving daughter of the late James A. and Olga M. Ross of Ocean Grove, N.J. Sarah graduated from Kearny High School in June of 1961. She earned her RN degree from Christ Hospital School of Nursing in Jersey City, N.J., in 1964 and her Master's of Business degree in 1986 from Cambridge College. Sarah had a lifelong career in healthcare, which culminated in her role as Executive Director of the Albany Citizen's Counsel of Alcoholism & Addiction from which she retired in 1998. She was predeceased in 2002 by her husband, Kevin Hall, whom she married on Sept. 18, 1965. Sarah is survived by her son, Kevin Ross Hall, his wife Melissa and her two grandchildren, Levi and Noah, all of Pittsfield; by her daughter, Elizabeth Anne Hall and her fiancee Raymond Saville, of Lenox; her brother, James M. Ross and his wife, Dianna, of Centennial, Colo., and Ocean Grove, N.J., and several nieces, nephews, brothers and sisters-in-law, whom she loved dearly. Sarah loved going to the Jersey Shore, the theater, dining out, and, most of all, spending quality time with her family. Sarah touched numerous people throughout her lifetime and her quick passing will be felt by many. FUNERAL NOTICE: A celebration of Sarah's life will be held on July 24, 2014, at 11 a.m. at the Church on the Hill in Lenox with the Rev. Natalie Shiras, Pastor, officiating.

The family of Sarah Hall created this Life Tributes page to make it easy to share your memories.

Send flowers to the Hall family.