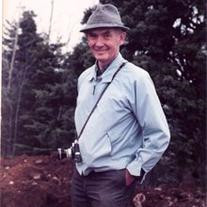 Sanborn F. Philp, 84, of Crofut Street, died Sunday, April 1st at Berkshire Medical Center. Born in New York City, December 18th, 1927, the son of Leonard Jerome and Louise Genevieve Fellows Philp, he was a graduate of Mamaroneck High School. He earned a Bachelor's degree in Physics, a Master's degree in Electrical Engineering, and a Doctorate in Physics, all from the Massachusetts Institute of Technology in Cambridge, Mass. Mr. Philp started his career as a physicist in the High Voltage Research Lab at MIT and moved on to the General Electric Company in Pittsfield in their Power Transformer Division. Later he transferred to the Research and Development Center at General Electric in Niskayuna, N.Y., where he worked prior to starting his own consulting business -- Eagle Engineering Inc. -- which he operated for many years. Together with some of his associates, he started Bio Pulse Incorporated in 1996, which pursued, among other things, the elimination of microbes from drinking water and other liquids. Mr. Philp met his wife, Christine Elora Trump Philp, while working at MIT, and they were married in the Church of the Advent in Boston on August 22, 1964. Most recently, he was a faithful communicant of St. Joseph's Church in Troy, N.Y. He was also a member of Sigma Xi Scientific Research Society; IEEE, the largest professional association for the advancement of technology; and the Sons of the American Revolution. Besides his wife of Pittsfield, he is survived by their daughter, Katherine P. Yost and her husband Martin of Sherman, Texas; their son, John N.S. Philp and his wife Nicole of Pittsfield; and nine grandchildren. He was predeceased by his brother Francis Higginson Philp. FUNERAL NOTICE: A Requiem Mass for Mr. Philp will be celebrated on Monday, April 16th, 2012 at 10 a.m. at St. Joseph's R.C. Church in Stockbridge. A private Burial will take place later this spring at the Wells River Cemetery in Wells River, VT. There are no calling hours. In lieu of flowers, donations in Mr. Philp's memory may be made to Hillsdale College, 33 East College St., Hillsdale, MI 49242, in care of the ROCHE FUNERAL HOME, 120 Main Street, Lenox, MA 01240.

The family of Sanborn Philp created this Life Tributes page to make it easy to share your memories.

Send flowers to the Philp family.