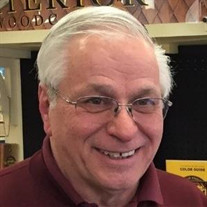 Rudolph John Mantegari, 74, of Velma Avenue, Pittsfield, died Friday November 2nd at Berkshire Medical Center surrounded by his loving wife and family. He was born in Brooklyn, NY August 20, 1944, the son of Pompeo and Amelia Delphine Bastianet Mantegari, he attended Lenox Schools and was a 1962 graduate of Lenox High School. Rudy enlisted in the US Air Force in 1963 and was honorably discharged with the rank of Airman First Class in November of 1966. He and his wife, Patricia McGee Mantegari, were married May 13, 1967 at St. Ann’s church. He was the manager of Caligari Hardware in Lenox for 48 years, retiring in 2015. Prior to that, he had been employed at the former Gregory’s Market and McGee’s Sunoco, both in Lenox. Rudy was dedicated to the community and believed in helping others with an act of kindness each day. He was a member of Unico for many years and the Commissioner of the Pittsfield Municipal Airport Commission for 16 years; earning an achievement of excellence award in 2011. Rudy had a passion for vintage cars and aviation. He was an instrument-rated pilot who enjoyed flying a small aircraft throughout New England. He was also an avid woodworker who loved to spend time in his woodshop creating beautiful furniture and keepsakes for family and friends. Besides his wife, of 51 years, he is also survived by his daughter Laurie Mantegari and her husband Mitchell Donahue of Hampton, New Hampshire, son Robert Mantegari and his wife Sarah Mantegari of Brentwood, New Hampshire, son Michael Mantegari and his wife Kirsten Mantegari of Londonderry, New Hampshire, his six grandchildren Quinn Mantegari, Brooke Mantegari, Tess Mantegari, Zachary Mantegari, Abigail Mantegari and Amelia Donahue. Calling hours will be held Friday November 9th prior to the funeral from 8:30am – 10:30am at Roche Funeral Home followed by a funeral service at 11:00am, at St. Ann’s Church in Lenox. A military burial will follow in St. Ann’s Cemetery in recognition of his service. In lieu of flowers, donations in his memory may be made to Alzheimer’s Association in care of the funeral home, 120 Main Street, Lenox, MA 01240

The family of Mr Rudy J Mantegari created this Life Tributes page to make it easy to share your memories.

Send flowers to the Mantegari family.