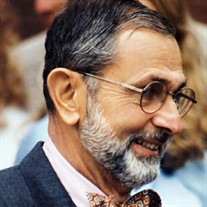 Trabulsi, Ronald, A. Died July 26, 2018 at Kimball Farms Nursing Home in Lenox after a fall. He was a gentle man and a gentleman. Ron was best known in the community for easily making trifle for 300, as well as endless quantities of demi-glace that he kept in his freezer to whip up sauces for weeknight sautes. Born in Brooklyn, NY, in 1932, he and his wife, Ann, moved to Pittsfield in 1966. In 2015, they moved to Kimball Farms Retirement Community where he enjoyed making new friends, keeping up with old ones, socializing, and dining out. Ron built, owned, and ran Pittsfield Bus and Travel for over 30 years while also pursuing a successful career in real estate where many of his tenants became long time friends. His true loves, besides his family, were, unsurprisingly, cooking, and gardening. He was alternately known as the Plant Dude or the Plant Doctor. His happiest times were when the house was full of guests enjoying his latest culinary adventure. During his 50 years of community involvement, Ron volunteered for the Pittsfield Housing Authority, was president of Pittsfield Rotary, and oversaw the greenhouses at Soldier On and Pittsfield High School. He was a dedicated and decades-long member of the Monday Evening Club. Middle son of Lily and Nesib Trabulsi, Ron attended Adelphi Academy and Boston University. He was drafted 2 days before his 26th birthday and fulfilled his duty baking cookies in the Natick Quartermaster Test Kitchens. Married in 1964, he leaves his wife of 54 years, Ann, his children Elizabeth (Luis Calderon), Lawrence (Mary Barry), two grandchildren, Ryan and Owen Trabulsi, whose activities he was so proud of and delighted in, and his sister, Gloria. He was predeceased by his brother Lawrence. Calling hours will be Wednesday evening August 1st from 4-7 pm at Roche Funeral Home in Lenox. The funeral will be Thursday August 2nd at 10am at Church on the Hill, in Lenox MA, celebrated by Pastor John Nelson. In lieu of flowers, donations may be made to The Christian Center, C/O Roche Funeral Home, 120 Main Street (PO Box 152), Lenox, MA 01240.

Trabulsi, Ronald, A. Died July 26, 2018 at Kimball Farms Nursing Home in Lenox after a fall. He was a gentle man and a gentleman. Ron was best known in the community for easily making trifle for 300, as well as endless quantities of demi-glace... View Obituary & Service Information

The family of Ronald A Trabulsi created this Life Tributes page to make it easy to share your memories.

Send flowers to the Trabulsi family.