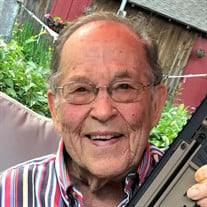 Ronald Q. Patti, 83, of Cheshire died peacefully at Berkshire Medical Center after a brief illness. He was born on December 12, 1938 in Pittsfield, MA., to the late Quinto and Viola Dubois Patti. He attended Pittsfield High School and was a 1956 graduate. After high school, Ronald enlisted in the Army Reserves. He owned and operated his own printing business in North Adams for 28 years, Postal Instant Press, and retired in 2010. Early on, Ron was well known for his sharp, unique skiing form. From being embedded with the Brodie Mountain Ski School, to obtaining his Professional Ski Instructors (PSIA) accreditation and teaching in Sestriere, Italy. Ron was a fierce competitor on the skeet field, where his passion for shooting resulted in countless championship titles at most clubs in the area including Hendrick Hudson, Lee and Watervliet. Those that shot with him or against him in competition, revered his participation on the field. He also had a passion for cars. Beginning early in life, Ron could be found drag racing his ‘57 Chevy, where most of his competitors would be seen in his rearview mirror. Later he moved on to Porsche’s becoming a 40+ year member of the Porsche Club of America. For sure, he lived by the old saying “drive fast, take chances”. Mr. Patti is survived by his son Christopher Patti and wife Darcy, of Pittsfield; son Geoffrey Patti and wife Karen, of Dalton; grandchildren Taylor and Skye Patti; his loving companion of 40 years Donna Bruseghini of Cheshire; his brother Tom Patti and sister, Gail Carnevale. A Celebration of Life for Mr. Ronald Q. Patti will be held from 2-4PM on April 21, 2022 at the Country Club of Pittsfield. Family and close friends are welcome to come and pay respects or share fun stories about Ron. The family wishes to send a special thank you to the doctors, nurses and staff at Berkshire Medical Center for their exceptional care and compassion. In lieu of flowers, Ron would approve of donations made to the Republican Party towards Making America Great Again.

Ronald Q. Patti, 83, of Cheshire died peacefully at Berkshire Medical Center after a brief illness. He was born on December 12, 1938 in Pittsfield, MA., to the late Quinto and Viola Dubois Patti. He attended Pittsfield High School and was... View Obituary & Service Information

The family of Mr. Ronald Q. Patti created this Life Tributes page to make it easy to share your memories.

Send flowers to the Patti family.