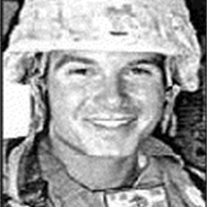 Lance Corporal Roger Wolf Muchnick, Jr., USMC, 23, of Westport, Conn., passed away on Monday, March 18, the casualty of a training accident at the Hawthorne Army Depot in Nevada. Roger and seven other Marines - all members of the Second Marine Expeditionary Force - were killed when a mortar shell exploded in its firing tube. Born Nov. 17, 1989, in Norwalk, Conn., he was the beloved firstborn child of Roger W. Muchnick, Sr., and Kate Coakley. Roger was an outstanding athlete at Staples High School in Westport, Conn., where he excelled in football and lacrosse. Following graduation in 2008, he matriculated to Eastern Connecticut State University, where he was a starting player on the varsity lacrosse team. Roger joined the Marines in May 2010, completing boot camp at Parris Island, S.C., and was based at Camp Lejeune, N.C. His first deployment was to Afghanistan as part of Operation Enduring Freedom, where he served for seven months. After returning stateside for additional training, his unit was deployed to Kuwait. At the time of his death, Roger's unit was undergoing winter survival tactical training in the mountains of Northern California and advanced artillery training in the Nevada desert in anticipation of a fall deployment back to Afghanistan. The accident occurred during their final week of training. He was very proud to serve his country as a Marine, and was looking forward to completing his college education following his service. In addition to his mother of Jupiter, Fla., and father of Ashville, N.C., Roger is survived by a brother, Will Muchnick, twin sisters Avery and Grace Muchnick, all studying in Florida, as well as grandparents Jerome and Marilyn Muchnick of Philadelphia and Robert and Mary Ann Coakley of Lenox. He also leaves behind his uncles, aunts and cousins, including Mike, Wendy, Kevin and Sean Coakley of Lenox; Rob, Catherine, Signy and Robert Coakley of New York City; and Hope, Alex and Oliver Pomerantz of Philadelphia. A Funeral Service and Burial with Full Military Honors for Lance Corporal Roger Wolf Muchnick, Jr., USMC, will be Friday morning, March 29th at 11 a.m. at St. Ann's Church in Lenox with the Rev. Christopher J. Waitekus, Pastor, officiating, along with Bishop Timothy A. McDonnell, Diocese of Springfield, Fr. Daniel B. Brunton, Pastor Emeritus of St. Ann's Church, and Fr. Daniel J. Boyle, Pastor of Blessed John Paul II Parish in Adams. Burial will follow in St. Ann's Cemetery. Visitation at St. Ann's Church prior to the 11 a.m. funeral will be from 9:30 to 10:30. In lieu of flowers those who wish may make a memorial donation to Disabled American Veterans (DAV) in care of ROCHE FUNERAL HOME, 120 Main Street, Lenox, MA 01240.

Lance Corporal Roger Wolf Muchnick, Jr., USMC, 23, of Westport, Conn., passed away on Monday, March 18, the casualty of a training accident at the Hawthorne Army Depot in Nevada. Roger and seven other Marines - all members of the Second Marine... View Obituary & Service Information

The family of Roger W. Muchnick, Jr. created this Life Tributes page to make it easy to share your memories.

Send flowers to the Muchnick, family.