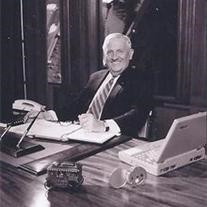 Robert A. Wells, 72, died peacefully at Berkshire Medical Center on Sunday, September 30th. Born on October 1, 1939, Bob was the son of Alton R. and Helen Connors Wells. He grew up in South Lee and relished his Berkshire heritage. Bob was interested in finance from his early teens. His entire professional career was in the financial services industry beginning in 1958 with Shearson Hammill and subsequently with the Springfield Institution for Savings, Ludlow Savings Bank, and Manhattan Savings Bank. In 1965 he joined Berkshire County Savings Bank. He was named president of the bank in 1977 at the age of thirty-eight and retired as Chairman of the Board in 2003. He retired from the Board in 2006. Under his leadership as CEO he converted Berkshire County Savings to a full-service bank and in 1977 orchestrated a merger with Great Barrington Savings Bank that paved the way to becoming a publicly held company. He served on the boards of the Massachusetts Bankers Association and the Nellie Mae Corporation. He also served as Chairman of the Board of Savings Bank Life Insurance and on committees of the National Association of Mutual Savings Banks. Bob had a special interest in historic preservation and was actively involved in the restorations of Old Town Hall on Park Square, Pittsfield's Fenn Street fire station and the Colonial Theatre. He was known nationwide for his innovative marketing programs that set Berkshire County Savings Bank apart from its competitors. He incorporated the antique Park Square popcorn wagon as a colorful identifying icon; he invited Orville Redenbacher to town with his hot air balloon; distributed a coin bank replica of the popcorn wagon to encourage savings; and established a program called Popcorn Savings for young depositors with its own junior board of trustees made up of school children who made annual visits to Wall Street. There were often sightings of Whiskers, the bank mouse and the Easter Rabbit at festive occasions. Many will remember Popcorn Savings Ski Nights where the bank's mascots were on the slopes with the children and their families. Bob was someone who remembered important milestones and saw them as reasons to celebrate. In 1976 bank employees were dressed in colonial garb to mark the nation's bicentennial. A few years later, he brought Boston Red Sox star Jim Rice to Pittsfield where he threw baseballs from the bank's fire escape to eager fans gathered below. A contingent of Berkshire fans then went to Boston to cheer the Red Sox to victory at Fenway Park. In 1986 he brought Natalie Cole to Pittsfield for a Park Square Concert to acknowledge the Bank's 140th anniversary; and in 1996, complete with fireworks, he marked the bank's 150th anniversary with a community party at Bousquet's Ski Resort and Pittsfield's Municipal Airport. Bob was well known as a community volunteer. He was president and board member of the Berkshire County Historical Society, treasurer and board member of the Berkshire Museum, board member of Recording for the Blind & Dyslexic, Chairman of the deToqueville Society of Berkshire County United Way, a corporator of Berkshire Health Systems, and a board member of the Pittsfield Downtown Association. He served as an overseer of the Boston Symphony Orchestra and co-chairman of the Boston Symphony Association of Volunteers at Tanglewood. He was the recipient of a number of awards, including the Lawrence Stratner Distinguished Citizen Award, Berkshire Community College Award, and United Way's Nicholas and Ruth Boraski Award. Bob is survived by his wife Claudia, to whom he was married for almost fifty years, a son Daren and his wife Maureen of Naples, Fl, a daughter Heather Wells Heim and her husband Matthew of Lenox, four grandchildren (Kathryn and Melanie Wells and Matthew and Benjamin Heim), brothers John Wells of Lenox and David Wells of West Brookfield, MA, and many nieces and nephews.. A beloved husband, father, grandfather, uncle and friend, Bob had a warm heart and a generous spirit. He and his entire family so appreciated the expertise and compassion of the many health professionals who were involved in his care for the past twenty years. A service of thanksgiving and remembrance will be held at Trinity Episcopal Church, 88 Walker Street, Lenox on Sunday, October 7th, at 1 p.m. In lieu of flowers memorial donations may be made to the Robert A. Wells Scholarship Fund at Berkshire Community College, to Trinity Episcopal Church, Lenox, for restoration of its National Historic Landmark buildings, or to Porchlight VNA through Roche Funeral Home, 120 Main Street, Lenox, MA 01240. To leave an expression of sympathy or for more information please visit www.rochefuneralhome.com

Robert A. Wells, 72, died peacefully at Berkshire Medical Center on Sunday, September 30th. Born on October 1, 1939, Bob was the son of Alton R. and Helen Connors Wells. He grew up in South Lee and relished his Berkshire heritage. Bob was interested... View Obituary & Service Information

The family of Robert Wells created this Life Tributes page to make it easy to share your memories.

Send flowers to the Wells family.