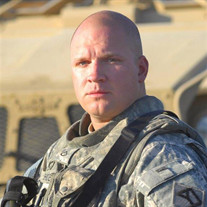 Lenox: Robert Joseph Shove, Jr., 33, of Lenox died on Sunday, March 5th at Berkshire Medical Center. Born in Pittsfield on February 3, 1984, the son of James and Lisa McNamee Murphy, he attended local schools. After his graduation from Lenox Memorial High School in 2002, he attended Berkshire Community College and worked for various restaurants as a cook including Friendly’s where he was also manager prior to enlisting in the United States Army. He served in Operation Enduring Freedom in Afghanistan and was honorably discharged in 2012. A decorated veteran, he was awarded the NATO Afghanistan Service Medal, Army Commendation Medal, Good Conduct Medal, National Defense Service Medal, Afghanistan Campaign Medal with two campaign stars, Global War on Terror Service Medal, Army Service Ribbon, and the Overseas Service Ribbon. Mr. Shove and his wife, Jillian D. Murphy, were married on October 20, 2007. Robert enjoyed and had his own radio show on WBRK in Pittsfield on Friday nights. And was a member of the Conklin-Lane-Coakley VFW Post #12079 in Lenox. Most of all he was a wonderful father to his children. Besides his wife and parents; Robert is survived by his two children; Madison P. Shove and Aidan Murphy at home, his support dog Essy; sisters Amanda Hall of Becket and Ashley Murphy of Pittsfield; grandfather Joseph Murphy of East Hampton; 14 nieces and nephews and many other relatives. The funeral for Mr. Robert J. Shove, Jr., will be held on Friday, March 10, 2017 at 11:00am at the Roche Funeral Home, 120 Main Street, Lenox, MA 01240. Calling hours will be Thursday, March 9th from 4:00pm-7:00pm. In Lieu of flowers donations may be made to Soldier On in care of the funeral home.

The family of Mr Robert J Shove Jr created this Life Tributes page to make it easy to share your memories.

Send flowers to the Shove family.