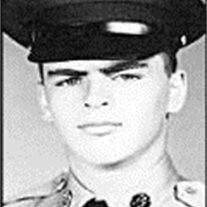 Robert passed away on Jan. 28, 2014, at Berkshire Medical Center from aspiration pneumonia at the age of 68. He was born in Pittsfield on Jan. 3, 1946, the son of Hugh and Margaret Wilson Page and was raised in Interlaken. He attended Stockbridge Plain School and received his high school diploma from Pittsfield High School in 1988. During the Vietnam War, he proudly served in the U.S. Army and was stationed in Germany for three years. He was honorably discharged in 1967 with the rank of SP-4. He was last employed with the City Of Pittsfield and also worked at Westfield River and Mead paper mills in Lee. He is survived by his loving wife of 46 years, Loretta Jones Page. They were married on Nov. 18, 1967, in the First Methodist Church in Pittsfield. He was brother to David Page Sr.; uncle to Sandy Page Keefner (Rich), Diane Page Morse (Lenny), David Page Jr. (Tammy), Michelle Page Cotsonas (Chuck), Jeremy Page (Sarah), Hugh Page (Brandi), Tammy Jones, Pam Jones and Ron Jones (Reggie), 23 great- nieces and nephews and seven great-great-nieces and nephews. Other survivors include his good friend, Will Borden, brother-in-law, Ronald Jones Sr. (Ellen) and sister-in-law, Gloria Jones Lawrence (Douglas), and several cousins, including Joan Ann Thompson. Besides his parents, he was predeceased by his brother, Hugh, and nephew, Randy. "Sleep In Heavenly Peace". My Love, B. The family would like to thank the staff of the CCU, Step Down and 2 South Units at Berkshire Medical Center for their tender, love and care of Robert. FUNERAL NOTICE: There will be no calling hours. A memorial service will take place at a date and time to be determined. ROCHE FUNERAL HOME is in charge of preparations. Expressions of sympathy in Robert's memory may be made to the Wounded Warrior Foundation in care of Roche Funeral Home, 120 Main Street, Lenox, MA 01240.

Robert passed away on Jan. 28, 2014, at Berkshire Medical Center from aspiration pneumonia at the age of 68. He was born in Pittsfield on Jan. 3, 1946, the son of Hugh and Margaret Wilson Page and was raised in Interlaken. He attended Stockbridge... View Obituary & Service Information

The family of Robert Carlton Page created this Life Tributes page to make it easy to share your memories.

Send flowers to the Page family.