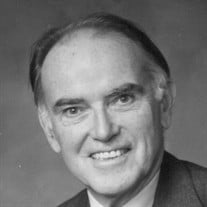 Robert Patrick McInerney, M.D., 92, passed away on April 3, 2016 at Kimball Farms Nursing Care Center in Lenox, Mass. He was surrounded by members of his family. Dr. McInerney, Bob as he was known, practiced internal medicine specializing in cardiology care in Pittsfield, Mass. from 1952 until his retirement in 1990. He was one of several physicians instrumental in the establishment of the medical education program at the former Pittsfield General Hospital, now Berkshire Medical Center, and served as its first chairman. He was a co-founder of IJI Medical Associates, one of the earliest Pittsfield group medical practices. He also taught at the University of Massachusetts Medical School. In 2005, the Berkshire Health Systems Board of Trustees honored Bob by adding his name to the BMC Honor Roll established to "recognize in a permanent way members of the medical staff whose work has brought honor and distinction to the profession and to the institution." Bob’s delight in delivering the first echocardiogram to the Berkshires was evident on his face as he explained how while he had listened to his patients’ hearts for many years, he suddenly could see the damage and know precisely how to intervene. Bob was born in Brooklyn, N.Y. on August 18, 1923. While growing up, he read in bed at night by the light of the Ebbets Field’s lights. He was, of course, an avid fan of the Brooklyn Dodgers until the team moved to L.A. He later switched his loyalty to the Boston Red Sox. Bob was educated at Brooklyn Prep, Columbia College, and the Columbia College of Physicians and Surgeons from which he graduated in 1946. Bob served in the United States Army Medical Corps during World War II and was stationed in Germany during the Berlin Air Lift in 1948-1949. Bob was equal parts energy, curiosity, optimism and adventurousness. And he was lucky. While at Columbia, Bob met the beautiful Gloria E. Monahan at a tea dance freshman year, and the rest is history. They were married in 1947 and had eight children together. Searching for the perfect place to practice medicine, raise families, sail and ski, Bob and his best friend and brother-in-law Dr. Clement C. Curd scoured New England and settled upon Pittsfield. The Berkshires proved to be a wise choice. Bob and Gloria found a warm, fun, stimulating community to raise an active family. Bob was quite the outdoorsman, reveling in skiing, hiking, tennis and sailing. His sailing exploits took him from Pontoosuc Lake to Cape Cod to a dicey trip in the Caribbean that ended in a mutiny by his crew – his wife. Bob's love of skiing was legendary. While in college, he and several friends made their way to New Hampshire and skied (or fell down) the Headwall of Mt. Washington. Bob was also a lifelong learner devouring the New England Journal of Medicine, the New York Times, and books on all subjects. In retirement he and his friend Dr. Sandor (Sandy) Wax taught courses on topics from the NEJM at the Berkshire Institute of Lifelong Learning. Bob is survived by his children, daughter Alice McInerney of New York City; daughter Eileen McInerney of Wellington, CO; son Peter McInerney of Denver, CO; son Patrick McInerney and daughter-in-law Cindy McInerney of Kents Hill, ME; son Michael McInerney and daughter-in-law Laura Page of Lee, MA; son Joseph McInerney and daughter-in-law Ariel Menninger of Auburn, CA; daughter Beth Clarke and son-in-law Robert Clarke of Carlisle, MA; son Thomas McInerney and daughter-in-law Heidi McInerney of Cape Elizabeth, ME; thirteen grandchildren – Keller, Eric, Christopher, Brendan, Lauren, Elise, Bahati, Clare, Kevin, Charlotte, Meredith, Ian, Abby; and two great-grandchildren – Madeline Mae, Henry. Bob’s sisters Patricia M. Curd, Irene Sullivan, and many nieces and nephews in the Curd, Sullivan and Hofford families also survive him. He is predeceased by his wife, Gloria Monahan McInerney, and his daughter-in-law Ann Frodey McInerney. Bob's children wish to thank our beloved aunt, Patricia M. Curd, for her care and devotion to her brother during the past year since Gloria died. We also salute the staff at Kimball Farms Nursing Care Center in Lenox for the expert, kind and thoughtful care they gave Bob. We are also thankful for the kind assistance of Bob’s caregiver Terrie Babcock from Home Instead who brightened his life this past year. Calling hours will be at Roche Funeral Home, Lenox, Sunday, May 1, from 4-7PM. A memorial service will be held at The Country Club of Pittsfield, Monday, May 2 at noon. In lieu of flowers, please make a contribution in Bob’s memory to the Berkshire District Medical Society Revolving Scholarship Loan at 85 Post Office Park, Suite 8518, Wilbraham, MA 01095

Robert Patrick McInerney, M.D., 92, passed away on April 3, 2016 at Kimball Farms Nursing Care Center in Lenox, Mass. He was surrounded by members of his family. Dr. McInerney, Bob as he was known, practiced internal medicine specializing... View Obituary & Service Information

The family of Dr Robert P McInerney created this Life Tributes page to make it easy to share your memories.

Send flowers to the McInerney family.