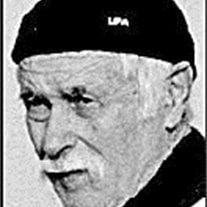 Robert B. Knowlton, died Tuesday at his home at age 96. Born in Salem, Nov. 12, 1918, the son of Laurence L. and Velma L. Turner Knowlton, he was a 1936 graduate of Wakefield High School, was captain of the football team during his senior year, and worked during his early years at Endicott Farm, (Danvers, Mass.) where his grandfather, Frank Knowlton, was farm manager. In 1938, Robert, along with his mother and three brothers, moved to Pittsfield, where his mother headed the office of the LICHTMAN TANNING CORP (former) 703 W Housatonic Street, Pittsfield. A US Army veteran of World War II, he served from 1941-45, receiving military training in Swindon, England, served as an ambulance driver in N. Africa, (attached to the Big Red '1') and again during the Invasion of Italy, (attached to the 82nd Airborne.) He was honorably discharged with the rank of Sergeant and returned home to Pittsfield to marry former sweetheart, artist Edith P. Hunt. Mr. Knowlton worked mostly as a carpenter and cabinet maker, throughout his career, though he also did skilled work in many other fields, including stone masonry, boat building and restoration, barn restoration, architectural design, surveying, and gardening, leading up to his retirement in 1981. Robert, together with his wife, operated a neighborhood Greenhouse business, 'the Friendly Gardens' in West Pittsfield, raising/selling vegetable plants and Gladiolas, and also a dog kennel, raising award-winning Dalmatians. Mr. Knowlton was an avid cyclist and motorcyclist, purchasing his first Harley-Davidson in 1940, he continued to enjoy both two-wheeled sports well into his 80's, including six years working as head mechanic for his son, Bruce's Moto-cross racing career. Robert was also an avid runner, and prominent senior athlete, winning awards in many Road Races and Cross-Country events, in distances ranging from the mile to the half-marathon, completing his last 5k race at age 90. In his later years, he studied the craft of guitar-making, completing over 40 instruments from wood that he personally cut and aged. Mr. Robert B. Knowlton is survived by his son, Bruce W. Knowlton, of Pittsfield. Besides his wife and parents, he was predeceased by three brothers, Donald L., Phillip W., and Richard K. Knowlton. FUNERAL NOTICE: A celebration of the life of Mr. Robert B. Knowlton will be Tuesday, Jan. 13 at 6 p.m. with Hospice Chaplain Rev. Richard Hayes officiating. Burial will be in the spring, in Mountain View Cemetery, Lenox. In lieu of flowers, donations in his memory may be made to the American Motorcyclist Association - in care of the ROCHE FUNERAL HOME, 120 Main Street, Lenox, MA 01240.

Robert B. Knowlton, died Tuesday at his home at age 96. Born in Salem, Nov. 12, 1918, the son of Laurence L. and Velma L. Turner Knowlton, he was a 1936 graduate of Wakefield High School, was captain of the football team during his senior year,... View Obituary & Service Information

The family of Robert Knowlton created this Life Tributes page to make it easy to share your memories.

Send flowers to the Knowlton family.