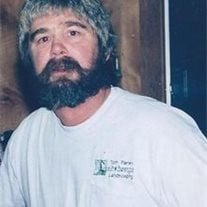 Robert Vincent Duby, Jr., 58, of Pine Street, South Lee, died Saturday morning at Berkshire Medical Center. Born in Pittsfield May 19, 1953, son of Robert V. and Margaret Ellen Talbot Duby, he attended local schools and was a 1972 graduate of Lee High School. Mr. Duby served in the Navy from 1974 until being honorably discharged on April 29th, 1976, much of that time aboard the USS Connole. He was employed over the years by his father as a plumber's assistant and also worked with various landscaping companies in the area. Bob enjoyed fishing and hunting, riding his Harley Davidson motorcycle, snowmobiling, playing cards, spending time with family and friends, and rooting for the New Orleans Saints. He is survived by his soul-mate, Joni Macdonald of Lee; sisters, Leah Duby Stanford of Lee, Patricia Dedrick and husband Dale of South Lee, and Christine Duby of Kenai, Alaska; brothers, Joseph Duby and Dawn of Ashley Falls and Gary Duby and wife Merri of Kenai; his nieces, Andrienne and Kelly Dedrick, and many other nieces and nephews in Alaska and California as well as several great-nieces and nephews. His family has lost their beloved brother and Pooh Bear. Always up for a road trip, he was a free spirit who loved to laugh and had the unique ability to make others laugh. His gregarious voice and vibrant presence will be remembered by all who knew him. MEMORIAL NOTICE: A service of remembrance honoring the life of Robert V. Duby, Jr. of South Lee will be celebrated Thursday, April 12th, 2012 at 5:30 p.m. at the ROCHE FUNERAL HOME in Lenox by the Rev. Richard Hayes. Calling hours at the funeral home will be April 12th from 4 p.m. until the time of the service, followed by a celebration of his life at Greenock Country Club in Lee. In lieu of flowers, donations may be made to the Roche Funeral Home, 120 Main Street, Lenox, MA 01240, to help defray funeral expenses.

The family of Mr. Robert V. Duby, Jr. created this Life Tributes page to make it easy to share your memories.

Send flowers to the Duby, family.