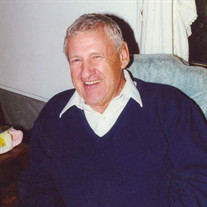 Robert Earl Brownlow, 92, of Lenox, MA passed away on Wednesday afternoon, May 19, 2021 peacefully at home after a short illness. He was born May 27, 1929 in Danbury, CT, the son of the late Earl and Mable Brownlow. Bob graduated from Danbury High School in 1947 and graduated from Clark University in Worcester, MA in 1956. Bob was a veteran of the Korean War and received a Purple Heart for the wounds he received in the conflict. He spent his entire 40-year professional career with Berkshire Life Insurance Co. in many different positions including Director of Pension Trust and General Agent of the Brownlow & Associates field agency. Bob married the love of his life, Elizabeth (Ibbie) Fischer on June 16, 1956 and spent 65 years in loving companionship. Bob and Ibbie lived in Pittsfield after their marriage and then moved to Lenox where they have resided for over 60 years. They were active in the Jaycees and Bob was on the finance committee of Zion Lutheran Church in Pittsfield. Bob enjoyed woodworking and carpentry and built everything from birdhouses to furniture and barns. Bob was an avid golfer and split his time between Lenox, MA and Jupiter, Florida to extend his time pursuing the game. Bob received an accommodation from the Massachusetts Golf Association for a hole-in-one on the Par 4 6th hole at the Country Club of Pittsfield with the irony being he actually struck his tee shot from the adjoining par 3 13th hole. Bob is survived by his wife Elizabeth Fischer Brownlow and his three children, William (Bill) and his wife Karen of Quincy, MA, Jocelyn (Jocie) Kurdzionak and her husband Jim of Lenox, and Kristin Czelusniak and her husband Tom, also of Lenox, MA, along with 5 grandchildren: Lynn, Ben, Emily, Ken, and Erin, 2 great-grandchildren: Noah and Grace, and sister; Barbara Brownlow of Lee, MA. Bob is pre-deceased by his sister Jane Brownlow Davis of Stoughton, MA. In addition to his family, Bob also leaves a host of friends and business colleagues who will miss his loyal friendship and wise council. Bob's family wants to make a special acknowledgment of the excellent care and respect that Bob received from Hospice Care in the Berkshires. Their devoted team was invaluable to us throughout his brief illness for their constant support and kindness. Funeral arrangements will be private. In lieu of flowers, donations may be made to Hospice Care in the Berkshires, in care of Roche Funeral Home, 120 Main Street, Lenox, MA 01240 in his memory.

Robert Earl Brownlow, 92, of Lenox, MA passed away on Wednesday afternoon, May 19, 2021 peacefully at home after a short illness. He was born May 27, 1929 in Danbury, CT, the son of the late Earl and Mable Brownlow. Bob graduated from Danbury... View Obituary & Service Information

The family of Mr. Robert E. Brownlow created this Life Tributes page to make it easy to share your memories.

Robert Earl Brownlow, 92, of Lenox, MA passed away on Wednesday...

Send flowers to the Brownlow family.