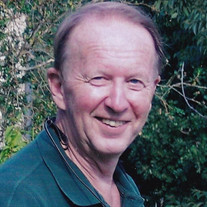 DR. ROBERT K. BROWN 1935-2019 LENOX --- Dr. Robert K. “Bob” Brown, 83, a long time resident of Lenox MA, died unexpectedly Wednesday, January 9, 2019 at Berkshire Medical Center surrounded by his loving family. Bob was born on February 13, 1935 in Richford, VT., to the late Robert and Hazel O. Brown. He attended Enosburg Falls High School and was a 1952 graduate. After high school, Bob attended University of Vermont where he received his Bachelor of Arts and his medical degree in 1960. He did his internship and residency at Hartford Hospital from 1960 to 1965. Bob married Marcia Beals Brown on June 23, 1959 in Glens Falls, NY. They met while both attending University of Vermont. Marcia pre-deceased him on January 3, 2014. Dr. Brown served in the United States Army during the Korean War and held the rank of captain from 1965-1967. He was stationed at the 406th Medical Laboratory in Camp Zama, Japan. He was honorably discharged in 1967. The family moved to Lenox, thereafter, he began working at Pittsfield General Hospital (Now BMC) as a pathologist and later, associate medical examiner as well. He was certified by the American Board of Pathology in Clinical Pathology and Anatomic Pathology. Bob retired in 2005 after 38 years at BMC. Bob was a member of the Town of Lenox Board of Health for many years. He also was a long time member of the Lenox Club and was presently on the Board of Governors there. He was a communicant of Church on the Hill and served on the finance committee for many years. Bob was respected and loved by all who knew him. He was a man of kind demeanor and subtle dry wit. Bob was a great example to his family; a more honest, fair, and responsible man there never was. He was a caring and generous husband, father, and grandfather who was always willing to help and support his family. He was a mentor and teacher, not only to his family, but to many of the medical residents that passed through the ranks during his time at Berkshire Medical Center. He enjoyed helping people navigate their path of life and their careers. Bob loved classical music, reading, and working on his property. He also loved to travel, as he & Marcia traveled to Europe multiple times with Italy being their favorite place to visit. Bob will be greatly missed. Dr. Robert Brown is survived by his children; Geoffrey K. Brown and his wife Cynthia, Christopher L. Brown and his wife Christie Billetter-Brown, all of Lenox, and grandchildren; Hudson and Ethan Brown and Orion Billetter. Per Dr. Robert Brown’s wishes there will be no services or calling hours. A celebration of his life and a private graveside service will be held at a later date. In lieu of flowers, donations in Bob’s memory may be made to Ventfort Hall in care of the Roche Funeral Home, 120 Main Street, Lenox, MA 01240. To share memories and stories please visit rochefuneralhome.com

The family of Dr Robert "Bob" Brown created this Life Tributes page to make it easy to share your memories.