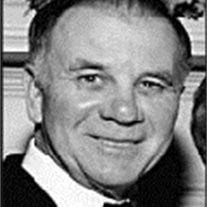 Richard E. O'Brien, 81, of Holmes Road, died Saturday evening at his home. Born in Pittsfield on May 28, 1932, the son of John J. and Elizabeth Keegan O'Brien, he attended Lenox schools and was a 1951 graduate of Lenox High School. Mr. O'Brien served in the US Army during the Korean War. He was employed for over 50 years in the Auto Body Repair business as a manager both at the former Bull Chevrolet in Lenox and later at Petes Motors in Pittsfield. Mr. O'Brien was a life-long communicant of St. Ann Church in Lenox and served as an usher for many years. For much of his life, he was a member of the Lenox Police Association and the Lenox Fire Co., and directed traffic during the summer season for many years. A stand-out athlete in high school, he continued to play basketball for the former Lenox Merchants semi-pro basketball team in the early 1950's. He managed Little League and Babe Ruth baseball for several years and also coached youth basketball. He and his wife, Margaret Rose Dooley O'Brien, were married in St. Joseph Church in Pittsfield on July 8, 1967. Besides his wife, Mr. O'Brien is survived by his two sons, Christopher P. O'Brien and wife, Anne-Marie, of Lenox and Stephen E. O'Brien and wife, Isabel, of Lenox; one sister, Barbara Gaherty and her husband, Thomas, of Lenox, and grandchildren Sean Patrick O'Brien and Molly Shea O'Brien, and Jack Keegan O'Brien and Claire Elizabeth O'Brien. Besides his parents, he was predeceased by his brothers, John J. O'Brien, Jr. and Charles W. O'Brien. FUNERAL NOTICE: The funeral of Mr. Richard E. O'Brien of Lenox will be Wednesday, June 12, 2013, at 9 a.m. from the ROCHE FUNERAL HOME, followed by a Liturgy of Christian Burial at 10 at St. Ann Church, celebrated by the Rev. Matthew Guidi. Calling hours at the funeral home will be Tuesday from 4 to 7 p.m. In lieu of flowers, donations in Mr. O'Brien's memory may be made to Hospice Care of the Berkshires in care of the funeral home, 120 Main Street, Lenox, MA 01240.

Richard E. O'Brien, 81, of Holmes Road, died Saturday evening at his home. Born in Pittsfield on May 28, 1932, the son of John J. and Elizabeth Keegan O'Brien, he attended Lenox schools and was a 1951 graduate of Lenox High School. Mr. O'Brien... View Obituary & Service Information

The family of Richard O'Brien created this Life Tributes page to make it easy to share your memories.

Send flowers to the O'Brien family.