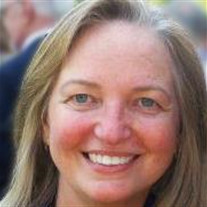 Richmond – Dr. Rebecca R. Fiske, of Richmond, Massachusetts, died on Wednesday, January 3, 2018 at Memorial Sloan Kettering Hospital after a long illness. At the time of her death, she was surrounded by family and her children. Rebecca was born in Rutland, VT on February 1, 1956, the daughter of Robert and Louise Fiske. She graduated from Bennington College in 1978 with a degree in English. After graduation, she worked for a time at Berkshire Community College in Pittsfield, MA, but soon transitioned to Simon’s Rock College in Great Barrington where she served in human resources, as dean of students, and finally, as a professor. Simon’s Rock became her primary professional focus as well as a bastion of friends and devoted students. Rebecca earned a Master Degree from Smith College and a doctorate in English from SUNY Albany. In time, she became a full professor of English and Critical Theory at Simon’s Rock. She had many academic interests but her main teaching focus was the critical interpretation of the Old Testament and the works of Walter Benjamin. She has published in a number of journals and was working on a book in the months before her death. She was a mentor to a great number of students, many who continued correspondence with her long after graduation. Rebecca loved her students and they loved her in turn. Rebecca had many interests outside of her work. She had a desire to help underserved children and adults with reading and writing skills and was active in that regard as a volunteer. She loved to travel, had visited many European cities – preferring Rome – and had backpacked for six weeks through Greece. She loved Jethro Tull and Neil Young, and loved taking walks with her Dachshund on the trails above Olivia’s outlook. She was a wonderful person and will be greatly missed. Rebecca is survived by her husband, Dr. Deane Zarvis; her children, Jim, Alex, Nick, and Rachael Zarvis; her grandchildren, Kostis and Lucas Zarvis; her sisters, Dr. Roberta Rusciano of New Jersey and Melissa Brackett of California, and her brother, Peter Fiske of Vermont. The funeral service for Dr. Rebecca R. Fiske will be held on Sunday, January 21, 2018 at 3:00pm at the Roche Funeral Home, 120 Main Street, Lenox, MA 01240. Calling hours will be from 1:00pm until the time of the service. In lieu of flowers, donations in Rebecca’s memory may be made in care of Win Commons at Simon’s Rock College in Great Barrington.

Richmond &#8211; Dr. Rebecca R. Fiske, of Richmond, Massachusetts, died on Wednesday, January 3, 2018 at Memorial Sloan Kettering Hospital after a long illness. At the time of her death, she was surrounded by family and her children. Rebecca... View Obituary & Service Information

The family of Dr Rebecca R Fiske created this Life Tributes page to make it easy to share your memories.

Send flowers to the Fiske family.