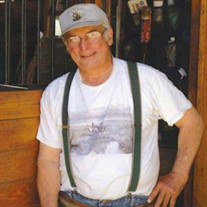 Ralph J. Rotondo Jr, 88, of Lee, passed away peacefully at Berkshire Medical Center on January 7th. Ralph was born on November 23, 1932 in Lee, MA at his family home. Born to the late Raffaele and Sadie Guercio Rotondo, he attended schools in Lee. Ralph worked as a paper maker for Kimberly Clark, retiring at age 55 after 38 years of service. Although Ralph retired from the mill, he continued to work as a Farrier, one of his many passions. Ralph had several hundred clients working as a Farrier, where he built strong, lasting friendships. Ralph worked for several farms before building his own. He raised various farm animals and teams of Belgian Draft Horses. He drove his horses in many parades including driving the H.B. May Steam Engine for the Lee Fire Department, for which he was an honorary member. He was a long time member of the Farm Bureau and a founding member of the Colonial Carriage and Driving Society. He drove his team in many Tub Parades in Lenox, and many people to their proms, weddings, and even a funeral. He drove wagon rides in the Norman Rockwell Christmas on Main Street in Stockbridge, Bartlett's Orchard, Undermountain Farm and also sleigh rides and plowing events at Hancock Shaker Village. Ralph also drove his horse and wagon onto the stage for a play at Jacob's Pillow. He and his team gained such notoriety he was hired to do a photo shoot for the Bridal Edition of Town and Country Magazine at Wheatleigh, in Lenox. The bright, big smile on his face while driving his horses displayed his joy. Ralph was a devoted father, kind, honest, hard working and generous man. He was proud of his horses, his work, and most of all his family. He enjoyed the simple things in life, being outside driving his tractor in the hayfield or on his farm. Ralph had a love for all animals and always had a dog by his side. On October 15th, Ralph and his love, Jeannette Besaw-Rotondo celebrated sixty-five years of marriage. Besides his wife at home, he is survived by his five daughters; Kathryn LaGrant (Donald Haywood) of Otis, Marie Rotondo (Don Cingrani) of Redding, CA., Linda Pascoe (Glenn Pascoe) of Australia, Elaine Lovato of Pittsfield, and Donna Rotondo of Becket. Eleven grandchildren; Melissa, Joshua, and Jonathan LaGrant, Matthew and Eric Tyer, Shannon, Luke, and Zack Plaquet, Justin Lovato and Lindsey Lovato Sekowski, Joe Rotondo, and their families. Eighteen great-grandchildren, and many nieces and nephews. Besides his parents, Ralph is predeceased by his great-grandchildren; Kyleen Burrell and Ella Rose LaGrant, his sisters; Amelia Parker and Josephine Tarmey and his son-in-law, Fred LaGrant. There will be a memorial service held at a later date to be determined at the convenience of his family. Memorial donations in Ralph's memory may be made to BMC Lymphedema Clinic or The Berkshire Humane Society in care of the Roche Funeral Home, 120 Main Street, Lenox, MA 01240.

Ralph J. Rotondo Jr, 88, of Lee, passed away peacefully at Berkshire Medical Center on January 7th. Ralph was born on November 23, 1932 in Lee, MA at his family home. Born to the late Raffaele and Sadie Guercio Rotondo, he attended schools in... View Obituary & Service Information

The family of Mr. Ralph J. Rotondo created this Life Tributes page to make it easy to share your memories.

Send flowers to the Rotondo family.