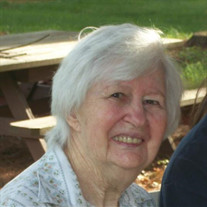 1931-2016 LENOX Pauline V. K. Vreeland, 85, of 26 Nielsen Lane, died peacefully early Monday morning at her home, with family members close by her side. Born in West Springfield, MA on May 26, 1931, daughter of Frank J. and Anelia Krajewski Kulpinski, Pauline attended local schools, graduating in 1949. Following graduation, she worked as a typist for the Eastern States Farmer's Exchange. During this time, she also played the organ at St. Ann's Church in West Springfield, directing a children's choir. In June 1953, after attending U-Mass College for one year, she married James B. Vreeland of Middlefield, MA. They lived in Morris Plains, NJ for six years, during which time she again worked as a typist for Bell Labs. In June 1959, they moved back to Massachusetts with their first three children, eventually residing at their house on Nielsen Lane. In Lenox, she was a dedicated member of St. Ann's parish, working as part time organist for ten years. She became full time organist in 1980, directing both the adult and children’s choirs. She retired in 2012. Music and family, especially her children and grandchildren, were always at the center of her life. She also took tremendous pride in her many gardens and loved to bake and cook for any occasion. She is survived by four of her children: Richard J. Vreeland and his wife Grace of Litchfield, NH; Carol J. Burns and her husband Ray of Tucson, AZ; Mary Ann of South Portland, ME and Sandra L. Morley and her husband Francis of Pittsfield, MA; a brother, John S. Kulpinski and his wife Martha of Dalton, MA; ten grandchildren and three great grandchildren. She was predeceased by her beloved husband, Jim; daughter Jean; sister, Helen; two brothers, Edmund and Theodore as well as a grandson Jonathan Brown. FUNERAL NOTICE: The funeral of Mrs. Pauline V.K. Vreeland of Lenox will be Saturday, September 3rd at 10am from the ROCHE FUNERAL HOME followed by a Liturgy of Christian Burial at 11am at St. Ann's Church. Celebrants will be the Rev. Monsignor John J. Bonzagni, Pastor, and Rev. Daniel B. Brunton, Pastor Emeritus. Burial will follow in St. Ann’s Cemetery. Calling hours at the funeral home are Friday evening from 5-8pm. In lieu of flowers, donations in Pauline’s name may be made to the St. Ann Church Organ Repair Fund in care of the funeral home, 120 Main Street, Lenox, MA 01240.

The family of Mrs Pauline V Vreeland created this Life Tributes page to make it easy to share your memories.

Send flowers to the Vreeland family.