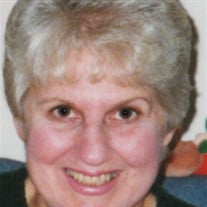 Patricia A. Tyburski, 75, of Pittsfield, died Wednesday at Mount Carmel Care Center, surrounded by beloved family and friends. Born in Pittsfield June 9, 1941, the daughter of Anthony J. and Alice Lathe Mariano, she attended Lenox schools and was a 1959 graduate of Lenox High School. Following high school, Patricia was employed as a secretary at General Electric Co. in Pittsfield. She later worked at Dore Creations in Lenox, Tycom, Inc., and as a receptionist at a variety of local radio stations and doctor’s offices including doctors Levison, Silverstein, and Noyes. Patricia was a communicant of St. Ann’s church. She enjoyed spending time with her grandchildren, cooking, gardening, and shopping with friends. She and her husband David G. Tyburski were married on June 4, 1966. Besides her husband of Pittsfield, she is survived by her daughter, Cynthia A. Cicchetti and her husband Eric of Pittsfield; sisters Dorothy Mae Mariano of Zionsville, IN and Janice I. Bontell and her husband William J. Bontell of Whitestown, IN; sisters-in-law Marian Planck and Joanne Hart, both of Poughkeepsie, NY; and her beloved grandchildren Sean and Sarah Cicchetti. A Liturgy of Christian Burial for Mrs. Patricia A. Tyburski of Pittsfield, who died September 28, 2016, will be celebrated Saturday at 11:30 am at St. Ann’s Church in Lenox, celebrated by the Rev. Monsignor John J. Bonzagni, Pastor. There will be no calling hours and burial will be at a later date. In lieu of flowers, donations in her memory may be made to the Boys and Girls Club of the Berkshires in care of the Roche Funeral Home, 120 Main Street, Lenox, MA 01240. Following the funeral mass family and friends are invited to attend reception beginning at 1:30 at the Lenox Community Center, 65 Walker Street.

The family of Mrs Patricia A Tyburski created this Life Tributes page to make it easy to share your memories.

Patricia A. Tyburski, 75, of Pittsfield, died Wednesday at Mount...

Send flowers to the Tyburski family.