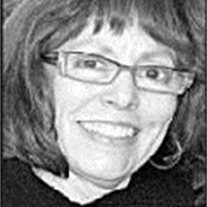 Pamela (Egea) Torres of Stockbridge, died at her home Sunday, July 21, 2013 after a courageous battle with cancer. Born in Los Angeles, CA on November 18, 1946 to Dorothy (Peterman) and Louis S. Egea, she spent her youth in southern California, moved to Belgium in 1968, San Francisco in 1976 & came to the Berkshires in 1987, where she spent the remainder of her life. She has been employed at the Red Lion Inn for the past 20 years, most recently as Nancy Fitzpatrick's personal assistant. Prior to that, she had worked at Country Curtains. Pam loved her friends, music, art, gardening, history & cooking. She was an avid reader & world traveler; in recent years, Martha's Vineyard became one of her favorite places. She supported public television & radio, Tanglewood, Berkshire Botanical Gardens, The Trustees of the Reservations and many other causes, charities & benefits. Ms. Torres is survived by a daughter, Lisa (Haynes) Peltier, her husband, Roger Peltier, Jr. & his daughter Vienne Peltier; a son, Stephen D. Torres; three brothers, Peter Egea of San Diego, CA, Louis Egea of Sun City West, AZ, James Egea & his son Peter J. Egea of NC. She also leaves behind Karen Wilson, Deborah Wiswesser, Isabel Soule & several other very dear friends & colleagues. The family would like to thank nurses Andrea Black, Denise Talabach & Sharon Rosenberg at Hospice Care in the Berkshires for all of their kindness, guidance & assistance during this difficult time, as well as the compassionate nurses in the chemotherapy unit at Berkshire Oncology. Many thanks also to the Red Lion Inn & ALL those who supported Pamela in her final days and throughout her life. Your love & encouragement gave her great joy & comfort. FUNERAL NOTICE: There will be a memorial service on Saturday, August 24, 2013 at 4 p.m. at the First Congregational Church, 4 Main Street, Stockbridge, followed by her burial at Stockbridge Cemetery & a reception at The Red Lion Inn. ROCHE FUNERAL HOME of Lenox is caring for arrangements. They can be reached at (413) 637-0699.

Pamela (Egea) Torres of Stockbridge, died at her home Sunday, July 21, 2013 after a courageous battle with cancer. Born in Los Angeles, CA on November 18, 1946 to Dorothy (Peterman) and Louis S. Egea, she spent her youth in southern California,... View Obituary & Service Information

The family of Pamela (Egea) Torres created this Life Tributes page to make it easy to share your memories.

Pamela (Egea) Torres of Stockbridge, died at her home Sunday,...

Send flowers to the Torres family.