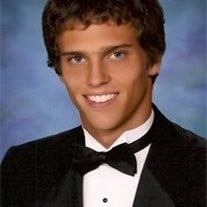 Neal Wesley Botteron, 21, of McKinney, TX passed away on September 10, 2015. He was born on January 26, 1994 in Hartford, CT to Linda (Howansky) and Leon E. Botteron. A kind, generous, gentle and loving soul, Neal was happy to be with family and friends, relaxing and sharing stories. He enjoyed jokes and comedy shows and could quote lines from his favorite movies and comedians verbatim. Naturally mechanically minded, he always had a Rubik's Cube nearby. He loved to figure out how things worked and liked working with his hands. He was at home rebuilding motorcycles, and enjoyed fixing computers, working on cars or tinkering with whatever needed fixing. Neal was an avid video gamer, and was a master at playing Guitar Hero. He was athletic and was interested in mixed martial arts. Neal enjoyed riding his motorcycle and traveling. This past year he traveled solo on his motorcycle around the western US, visiting family and friends along the way. He truly experienced life in his 21 years by skydiving twice, riding motocross, flying a stunt bi-plane, driving a high speed Lamborghini, and racing a NASCAR racecar at 150 mph. He enjoyed exercise and he trained and competed in 4 half marathons, 1 full marathon and a Tough Mudder. He spent most summers on Cape Cod fishing, boating and tubing. Neal attended Heritage High School in TX where he was an AP National Merit Scholar, power lifter and track athlete. He threw shot put and held the school record for discus. He was accepted in the Engineering Program at University of Texas at Austin, but deferred his admission to focus on his health. Neal leaves his parents, Leon and Linda, brothers Ryan, and Eric, sister Jennifer, and faithful canine companion Halo; Aunt Lou, Uncle Joe and cousins Maggie, Joey and Angie Grabmeier; Aunt Joyce Anastasia; Uncle Andy Howansky; Aunt Vickie, Uncle Bill, and cousins Cameron, Joshua and Nathaniel Meyer; Uncle Ken, Aunt Barb and cousin Kara Howansky; grandparents Harry and Arlene Howansky; and grandmother Marjorie Botteron. Neal also leaves lots of love and many broken hearts from countless friends and family members. Neal was predeceased by his grandfather Leon W. Botteron. A service by the Rev. David Hurst (Pastor of Grace Union Church in Wilbraham) will be held on Tuesday, September 15th, 2pm, at Roche Funeral Home, 120 Main Street, Lenox, MA. All are welcome. An online guestbook is available to share a memory of Neal or message of sympathy with his family at: www.Rochefuneralhome.com. In lieu of flowers, donations may be made to Austen Riggs Center in Stockbridge MA.

Neal Wesley Botteron, 21, of McKinney, TX passed away on September 10, 2015. He was born on January 26, 1994 in Hartford, CT to Linda (Howansky) and Leon E. Botteron. A kind, generous, gentle and loving soul, Neal was happy to be with family... View Obituary & Service Information

The family of Neal Wesley Botteron created this Life Tributes page to make it easy to share your memories.

Neal Wesley Botteron, 21, of McKinney, TX passed away on September...

Send flowers to the Botteron family.