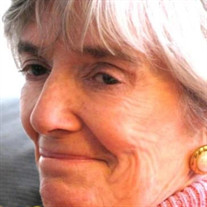 Nancy Fremont of Lenox, MA passed away on February 26, 2022, at age 86 after a brief illness. Nancy was the life partner of Myron (Mike) Schiffer, with whom she shared more than 40 years. Nancy was born in Portland, Maine and was raised in Newton, Massachusetts and Wells, Maine. She was a proud and adoring member of the extended Spiller-Neagle family and spent much of her childhood at the family farm in Wells. The daughter of a librarian, she attended public schools in Newton, MA and became a lifelong grammarian, known throughout her life to send letters of correction to local newspapers and other publications to address grammatical errors. After graduating from Newton High School, Nancy went on to earn her undergraduate degree from Milwaukee Downer College in Appleton, Wisconsin. Nancy began raising a family in the late 1950s and by the late 1960s was a single mother of three, living in Harvard, MA. She was a devoted mother who always managed to provide structure, opportunities and a comfortable home for her children. The family moved to Amherst, MA in the early 1970s, and Nancy earned her Masters Degree at UMass Amherst, while also managing to work and raise her family. In the late 1970s Nancy relocated to the Berkshires, settling first in West Stockbridge, where she met her partner Mike, a Berkshire-based pianist. Nancy and Mike were well known to the staff and patrons at the Shaker Mill Tavern, where Mike entertained patrons with selections from the Great American Song Book and Nancy learned people's life stories while enjoying the music. In the early 1980s Nancy and Mike settled in the center of Lenox, where they transformed an early 1900s Victorian into a beautiful home overlooking Lilac Park. Over the ensuing decades Nancy worked primarily as a bookkeeper, supporting various local businesses and individuals. She also rejuvenated her longtime interest in croquet by joining the Lenox Croquet Club and competing in various regional tournaments, occasionally prevailing over much younger, college-age opponents. Nancy's later years were focused on spending time with Mike and her family, maintaining her home and gardens, and keeping her vocabulary skills sharp by playing Words With Friends. Well into her mid-80s Nancy was able to put on a master class in vocabulary, correctly answering virtually all of the practice vocabulary questions for the Graduate Research Exam when quizzed by her grandchildren. Nancy will be greatly missed by her partner Mike Schiffer, her three children, Erich von Staats of Marstons Mills, MA, Gretchen Fenton (James) of Sunderland, MA, and Aaron von Staats (Teresa) of Wenham, MA, her nine grandchildren and her two great-grandchildren. She is pre-deceased by two brothers, Philip Neagle and George ("Aldie") Neagle, a son Ethan, and a grandson Jeremy. Services will be held on Saturday, March 5, 2022, at 11:30 a.m. at the Chapel of the Church on the Hill, located at 55 Main Street in downtown Lenox adjacent to Lilac Park. A reception will follow. Nancy was a lifelong supporter of and listener to National Public Radio. In lieu of flowers, please consider a donation to your local NPR station.

Nancy Fremont of Lenox, MA passed away on February 26, 2022, at age 86 after a brief illness. Nancy was the life partner of Myron (Mike) Schiffer, with whom she shared more than 40 years. Nancy was born in Portland, Maine and was raised in... View Obituary & Service Information

The family of Nancy Fremont created this Life Tributes page to make it easy to share your memories.

Send flowers to the Fremont family.