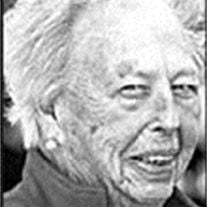 Mildred Goudey, formerly of Everett, MA and most recently of Lenox, MA, died peacefully on August 20, 2015 in Vallejo, CA where she was residing with her daughter and daughter-in-law since September 2014. Born in 1920, she celebrated her 95th birthday on May 12, 2015. Daughter of Jack C. Comeford and Jennie Lindsay Comeford; Sister of Robert L. Comeford of NH and Edward P. Comeford of Venice, FL and the late Jack C. Comeford. Mildred worked for the City of Everett for 37 years in the Office of Veterans Service and as Secretary of Glenwood Cemetery, where she retired as Superintendent. She leaves behind her daughter, The Reverend Dr. June C. Goudey of Vallejo, CA and her wife, Ann Feaver; her son, Richard A. Goudey of Lenox, MA and his wife, Emilie and two grandchildren: James A. Goudey of Fort Worth, TX and his wife, Despina, and Lisa M. Goudey of Lenox, MA. Past-President of Everett Emblem Club No.32 and Past-President of the American Legion Auxiliary No. 176; she was also Treasurer and President of the Walking Club of Everett Armory. Beloved by many, Millie was a devoted fan of the New England Patriots and the Boston Red Sox. FUNERAL NOTICE: A viewing for family and friends will be held from 5 to 7p.m. Thursday the 17th of September at the Roche Funeral Home, 120 Main Street in Lenox, MA (413-637-0699). Her funeral will be held on September 18th at 11a.m. at The Church on the Hill, UCC at 169 Main St. Lenox, followed by burial at Mountain View Cemetery in Lenox. In lieu of flowers, donations can be made to American Cancer Society , P.O. Box 22478, Oklahoma City, OK 73123 or to Sutter Care at Home Gift Processing, PO Box 160045, Sacramento, CA 95816.

Mildred Goudey, formerly of Everett, MA and most recently of Lenox, MA, died peacefully on August 20, 2015 in Vallejo, CA where she was residing with her daughter and daughter-in-law since September 2014. Born in 1920, she celebrated her 95th... View Obituary & Service Information

The family of Mildred Goudey created this Life Tributes page to make it easy to share your memories.

Mildred Goudey, formerly of Everett, MA and most recently of...

Send flowers to the Goudey family.