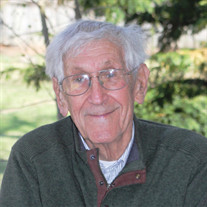 Lenox – Michael J. Bacha, 97, of Lenox died on Wednesday, June 10, 2020, at Mount Greylock Extended Care Facility. Born on February 18, 1923, in Newark, NJ, to the late John and Mary Bacha, he attended local schools, graduating from East Side High School, Newark. After high school, Michael enlisted in the United States Army Air Corps, serving during in WWII. He was honorably discharged in 1946. Michael worked as an independent Insurance Broker until his retirement. Michael was a sports fan (particularly the New York Giants and later the Boston Red Sox), loved reading historical literature, and took great pride in his home. But his primary pastime was loving and supporting his family. He was known for his joyful laugh, the letters of advice he would meticulously type, and making sure everyone backed out of the driveway properly. Michael married Dorothy Golembeski in East Orange, NJ, on Oct. 2, 1954. They started their family in East Orange before moving to South Plainfield, N.J., and later to Martinsville, N.J., where they lived for 33 years. Later residences were in Whitehouse Station, N.J., and most recently Lenox. Besides his wife of Lenox, Michael is survived by his children; Leslie A. Boudreau of Lee, Diane M. Bacha (John Koethe) of Milwaukee, WI., Michael J. Bacha, Jr., (Jill) of Montclair, NJ., grandchildren; Emily Burniske (Darin) of Southwick, MA., Kathryn Boudreau (Patrick Hall) of Lee, MA., Sam Boudreau (Samantha Domingo) of Union, NJ., Kaylyn, MaryClare, Michael Joel, and Jacob Bacha, all of Montclair; great grandchildren James, Noah and Finn Burniske of Southwick, MA. Besides his parents, Michael is pre-deceased by his brothers John, Steve and William, and his son-in-law, James Boudreau. There will be a private service at St. Mary’s Church. Burial will be held at a later date in the family plot in New Jersey. In lieu of flowers, donations in Michael’s memory may be made to the Veteran’s Administration or Our Lady of Lourdes Church in Whitehouse Station, N.J., in care of the Roche Funeral Home, 120 Main Street, Lenox, MA 01240.

The family of Mr Michael J Bacha created this Life Tributes page to make it easy to share your memories.

Send flowers to the Bacha family.