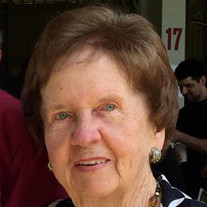 Lenox – Mary Jane Pignatelli, 94, of Lenox passed away early Tuesday morning surrounded by her loving family. Born in Poultney, Vermont on September 20, 1924 to the late Charles and Kathryn McCann Flood, Mary Jane attended Cathedral High School in Springfield, Massachusetts and graduated from the College of Our Lady of the Elms. She continued her education at Middlebury College in Vermont where she earned her Master’s Degree in Foreign Languages. Mary Jane married John Pignatelli in 1954, and on February 20, they would have celebrated 65 years of marriage. Mary Jane worked as a high school language teacher, spending most of her 38-year career in the Lenox Public School system until her retirement in 1986. While best known as a French teacher, she also taught English and Latin. Additionally, she taught the young seminarians Spanish at the former Bellefontaine Seminary. She shared her love of language by organizing and chaperoning several school trips to visit various regions of France and Canada, creating lifelong memories for her students. She believed in providing opportunities for students of all means by coordinating international dinner fundraisers to help defray the costs. Mary Jane was a communicant of St. Ann’s Church, a member of the Catholic Daughters of America, the Rosary Society and the Kiwanianne Club. Throughout her teaching career, while raising her five children who were her pride and joy, Mary Jane was also the bookkeeper for the family electrical business, Pignatelli & Piretti, and was a supportive partner in John’s many years in public service. Mary Jane and John enjoyed their retirement years wintering in Naples, Florida where they were very active and had many friends. Mary Jane, a gifted pianist, shared her musical talents in many of the Naples community variety shows. She was also a surprisingly good bocce player, garnering the club championship. While at home in Lenox, she found great joy in caring for and spending time with her grandchildren. Mary Jane will be remembered by all who knew her as a remarkable woman, humble beyond words, intelligent, polite, and courteous. She was a woman of great insight on matters large and small, and a gifted teacher. Most importantly, she was a loving wife, mother, grandmother, aunt and friend. In addition to her beloved John, Mary Jane is survived by her children; Donna M. Pignatelli, Lisa P. Slosek (Wayne), William “Smitty” Pignatelli (Allyce Najimy), Laurie P. Schiff (Scott), and Scott M. Pignatelli (Kathy McNinch); and grandchildren, Travis and Anah Pignatelli, Peyton and Ayva Schiff, Mia and Jack Pignatelli. She also leaves many nieces and nephews who hold a special place in her heart. A Liturgy of Christian Burial for Mary Jane Pignatelli will be held on Saturday, February 9, 2019 at 11:00am at St. Ann’s Church with Monsignor John Bonzagni, officiating. Burial will follow in St. Ann’s Cemetery. Calling hours will be held on Friday, February 8, 2019 from 4:00 pm-6:00 pm at St. Ann Church. In lieu of flowers, donations in Mary Jane’s memory may be made to St. Ann’s Church Parish Center or Kimball Farms Nursing Care Center Activities Fund in care of the Roche Funeral Home, 120 Main Street, Lenox, MA 01240.

The family of Mrs Mary Jane Pignatelli created this Life Tributes page to make it easy to share your memories.