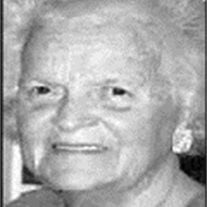 Mary Jane Gable, 93, of Naples, Fla. and Lenox died peacefully surrounded by family at Berkshire Place on May 31, 2014. She was born on August 31, 1920 in Washington, D.C. to the late Sidney Dale and Bonnie Jean Kirkpatrick. The family moved to New Jersey where her brother, Dale, was born and where she graduated from Columbia High School in 1938. She attended the Univesity of Illinois where she became a proud sorority sister with Chi Omega and graduated with a degree in home economics in 1942. While at college in Illinois, she met the lover of life, Allen Gable, from Rockford, Ill. on a blind date and they shared many "Coca Cola" dates during her senior year. They married on December 28, 1942 in Chicago, Ill. and remained happily married until Allen's death in 1997. The happy couple had three children, John, Bonnie and Patrick. The family moved to Lenox in 1955. Mary Jane and Allen founded Launderwell, Inc., working together for 35 years building and managing coin-operated laundries across New England. Mrs. Gable was also very active in her communities. She served as president of the College Club and remained an active member of PEO for 30 years until her death. She taught nutrition to young mothers in Berkshire County while active with the Girls Club and helped develop and organize the Festival of the Trees at Berkshire Museum. A member of The Church on the Hill in Lenox, she served as director and teacher in the Sunday School program. As a proud mother, she contributed her time, energy and financial resources to her children's participation in organizations and programs such as the Girl and Boy Scouts, Friends of Lenox School, the Theodore Roosevelt Association, Lunch Time Theatre, Sunshine Stage, Town Players and the PTA. As a lifelong republican, she even temporarily registered as a democrat to vote for her son in the democratic primary for State Senate. Mrs. Gable was the oldest member of the Kirkpatrick Klan, faithfully attending all family reunions in Illinois and Indiana where she proudly showed off her children, grandchildren and great-grandchildren. Mary Jane will be remembered as a wonderful hostess to her many friends, her children's friends, relatives, in-laws and extended family members who visited her Kneeland Avenue home in Lenox and at the Boulevard Club condo in Naples, Fla. Her photo albums are filled with smiling visitors who enjoyed her genteel hospitality, her caring and love. She was predeceased by her husband, Allen, her son, John, and her daughter, Bonnie. She is survived by her son, Patrick Gable and his wife, Janet Smargie; her granddaughter, Kate Bright and husband Eric Bright and their children, Taylor, Charlotte and Stella, and her granddaughter, Bonnie Koonsman and husband, Aaron Koonsman as well as the mother of her grandchildren, Patricia Bull. The family wishes to thank Hospice Care of Berkshire County, Berkshire Place and it's staff, the folks at Sugar Hill in Dalton, and the many nurses and care-givers of Interim Healthcare and Mountainview Healthcare who lovingly assisted Mary Jane in the last two years of her life. FUNERAL NOTICE: A memorial service for Mary Jane Gable of Naples, Fla. and Lenox, will be conducted at the Church on the Hill in Lenox, Thursday, June 5 at 11 a.m., by the Rev. Natalie Shiras, Rector. A reception at the Lenox Club will follow burial in Mountain View Cemetery. In lieu of flowers memorial donations may be made to the Church on the Hill.

Mary Jane Gable, 93, of Naples, Fla. and Lenox died peacefully surrounded by family at Berkshire Place on May 31, 2014. She was born on August 31, 1920 in Washington, D.C. to the late Sidney Dale and Bonnie Jean Kirkpatrick. The family moved... View Obituary & Service Information

The family of Mary Jane Gable created this Life Tributes page to make it easy to share your memories.

Send flowers to the Gable family.