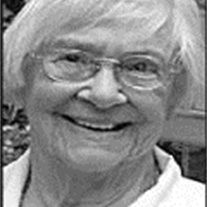 Mary Elizabeth (McCarthy) Coffin, 93, dedicated civic leader, decorated attorney, amazing mother of eight, grandmother, great-grandmother, sister, aunt and cousin, second mother of many, and friend to many more, died peacefully Jan. 26, 2014, at Kimball Farms Nursing Care Center in Lenox. Mary, also known as Betty, was predeceased in 2008 by her husband and love of her life of 65 years, Louis F. (Lou) Coffin, Jr. Mary was born on Oct. 15, 1920, in Syracuse, N.Y. She was the daughter of Mildred Miller McCarthy and Dennis Percy McCarthy, and the granddaughter of Nathan Miller, Governor of New York, 1921-1922. She was also the fourth great-granddaughter of Benjamin Franklin. Her great-great-grandfather was Thomas McCarthy, nominated to be the first Mayor of Syracuse. Mary graduated from the Goodyear Burlingame School in Syracuse in 1938 and from Radcliffe College in 1942. She and Lou married in 1943 and settled in Schenectady in 1949 as Lou pursued his career as a research scientist with GE. There they raised eight children in a lively and often raucous household where Mary also took many of her children's friends under her wing, providing emotional support and words of wisdom. She had a rare ability to relate to and mentor children of all ages on a wide variety of subjects, becoming a role model not only for her children but for many others in the community who came to admire and respect her for her intelligence, lack of pretense, equanimity, and caring for those in need. She could easily cook a dinner for 20 and often opened her home to friends and friends of friends. The more the merrier. Nothing fazed her and she was loved by all. Even while raising her family, Mary was a pioneer for women's and children's causes and heavily involved in Schenectady politics. Mary was an active member of the Junior League, League of Women Voters, a director of Hospice, Urban Renewal, and the Human Rights Commission, just to name a few. Summers were spent "relaxing" at the home Lou built on Skaneateles Lake where "Aunt Betty" was known for her taffy pulls, warmth, soft touch, welcoming nature, and knowledge of local geology. Somehow, she always managed to find time for tennis, bridge, golf, a good book, and the daily New York Times crossword puzzle. Having put aside her dream of attending medical school for too long, Mary enrolled at Albany Law School in 1963, at the age of 42. One of only two women in her class, Mary earned her law degree in June 1967, and went on to an illustrious career in family practice, continuing to focus on public service and supporting those in the most need of assistance. In 1988, Mary was awarded the prestigious Root/Stimson Award by the New York State Bar Association. Named for Elihu Root and Henry L. Stimson to honor their commitment to public service, this award is presented annually to honor a lawyer who has demonstrated outstanding commitment to community and volunteer service and to the improvement of the justice system In the letter notifying Mary of the award, the nominating committee noted, "You have truly brought distinction to the profession through your dedicated service to your fellow man and to your community." In 1997, after 30 years in practice, Mary retired and moved with Lou to Lenox, where they spent the remainder of their lives, continuing to summer with family and friends at "the lake." Mary loved to travel. She spent the summer of 1938 bicycling in France with the Experiment in International Living. She and Lou visited most corners of the world with Mary's sister and brother-in-law, Mil and Paul Riemenschneider. She shared her love of painting with daughter Maggie, an accomplished artist on Orcas Island, Wash. Words cannot describe the depths to which she was loved and admired by her family and all those who were fortunate to have had her in their lives and whose lives she enriched. Mary was predeceased by a son, Louis "Chip" Coffin in 2004 and by her brothers, Dennis and Nathan McCarthy. She leaves behind her sons, John Coffin (Marti) of Scituate and Robert Coffin (Suzanne) of Skaneateles, N.Y.; her daughters Sally Fitzgerald (Joe) of Martha's Vineyard, and Bonita Springs, Fla., Laurie Koch (Tom) of Edina, Minn., Patricia Coffin (Jeff Mullen) of Sudbury, Deborah Higgins (Pat) of West Rutland, Vt., and Maggie Sharkey (Neil) of Eastsound, Wash.; her daughter-in-law, Susan Coffin of Rocklin, Calif.; her AFS (1968-69) daughter, Sabine Freudenberg of Regensburg, Germany; 15 grandchildren and 16 great-grandchildren; her sisters, Mildred Riemenschneider of Santa Barbara, Calif., and Patricia Korry of Charlotte, Va., and many nieces, nephews, cousins, and dear friends. FUNERAL NOTICE: Memorial services will be held on March 8 at 11 a.m. at St. Elizabeth's Episcopal Church in Sudbury, and at Mary's home in Widewater on Skaneateles Lake, N.Y., this summer. Mary's family would like to extend their gratitude for the wonderful, loving caregivers at Kimball Farms Life Care, Pine Hill Assisted Living, Life Enrichment Program, and Nursing Care Center in Lenox. Donations in her memory may be made to the Alzheimers Foundation in care of the ROCHE FUNRAL HOME, 120 Main Street, Lenox, MA 01240.

The family of Mary Elizabeth Coffin created this Life Tributes page to make it easy to share your memories.

Send flowers to the Coffin family.