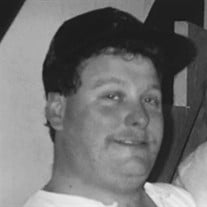 Mark E. Hinman, 54, of Pittsfield, passed away Friday at BMC. Born in Troy, NY, February 23, 1963, the son of John Hinman and the late Anne Murphy Hinman, he attended Lenox schools, was a 1981 graduate of Lenox Memorial High School, and later attended Berkshire Community College. Mark was employed as a Paver Operator for Tri-Town Paving for 28 years, with a crew that he loved like family. He was survived by his loving wife, Deann Y. Kern Hinman, whom he married on October 5, 1991; and his daughter Marcella Anne Hinman (his Chickabub) and her boyfriend, Anthony. He is also survived by his three brothers, Steven B. Hinman, Kenneth G. Hinman (wife Ginger) and Paul Hinman, (wife Amanda); and three nieces, Ashleigh, Paige, and Peyton. Mark was a loyal, kind, fun-loving person & a warm welcoming friend to all; he was widely loved & will be deeply missed by many other family members, friends, and pets, Jewel, Jax & Oliver. Some of Mark's favorite things were spending time with family & friends, golfing, snowmobiling, reading, and watching movies. Above all else, he was the most dedicated, die-hard Jets fan. He lost a courageous battle with cancer; fought until the very end and never once lost his positive, light-hearted spirit. A celebration of the life of Mark E. Hinman will take place at the Stockbridge Sportsman Club, 24 West Stockbridge Rd., Route 102, Stockbridge, MA on Friday, October 20th at 5:00pm.

The family of Mr Mark E Hinman created this Life Tributes page to make it easy to share your memories.

Send flowers to the Hinman family.