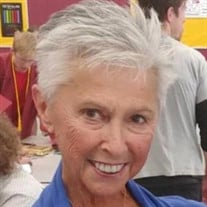 Marie Claude Duby, 73, of Lenox, died Thursday morning at Berkshire Medical Center. Born November 22, 1947 in Carhaix-Plouguer, Brittany, France, the daughter of Auguste Y. and Maria A. Pinson Kergaravat, she came to the US with her parents as a baby. They made their home in Lenox Dale where she attended local schools and was a 1966 graduate of Lenox High School. Marie also knowns as Claudie, began her career at General Electric Co. in Pittsfield as the first female draftsperson. She worked for the Lenox National Bank and then became the owner of the Lenox Dale Package Store, and bookkeeper for Clifford Oil Co. She worked for the Lenox Housing Authority and later became the Treasurer and Clerk for the Town of Lenox for 30 years. It was said that she really worked for the people of Lenox, not just the town. She retired in 2015. She was a life-long communicant of St. Vincent de Paul Parish in Lenox Dale. She enjoyed flowers, yardwork, and gardening, taking trips on the back of her husband's Harley, Traveling, and camping trips with her husband and friends. She loved and cherished time spent with friends and family, especially her grandchildren. Mrs. Duby and her husband, John E. (Chopper) Duby, were married March 17, 2006. Besides her husband of Lenox, she is survived by her son, William C. Colvin (Lisa) of Lenox Dale, and daughter Melissa A. Clement (Trevor) of Lenox; her sister Anne K. Flynn (Thomas); grandchildren Patrick W. Colvin and Katie Ann Colvin, and Charlie H. Clement; nephew Eammon T. Flynn and her "favorite" niece Ali Flynn. Her first husband, William H. Colvin, died May 25, 1996. The funeral for Mrs. Marie C. Duby of Lenox will be celebrated Wednesday Morning April 21st at 10 am at St. Vincent de Paul Church by Rev. Monsignor John J. Bonzagni, Pastor. Burial will follow in St. Ann's Cemetery in Lenox. Calling hours at St. Vincent de Paul Church are Tuesday from 4-6 pm. In lieu of flowers memorial donations may be made to either the Lenox Dale Fire Co. or Community Access to the Arts ("CATA") in care of the ROCHE FUNERAL HOME, 120 Main Street, Lenox, MA 01240

Marie Claude Duby, 73, of Lenox, died Thursday morning at Berkshire Medical Center. Born November 22, 1947 in Carhaix-Plouguer, Brittany, France, the daughter of Auguste Y. and Maria A. Pinson Kergaravat, she came to the US with her parents... View Obituary & Service Information

The family of Mrs. Marie "Claudie" Duby created this Life Tributes page to make it easy to share your memories.

Send flowers to the Duby family.