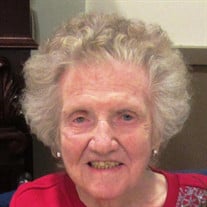 Marie F. Connelly, 102, died Saturday afternoon at Kimball Farms Nursing Care Center where she had been a patient for the past 9 months. Born in Carhaix-Plouguer, Brittany, France December15, 1913, the daughter of Toussaint M. and Marie Rivoal Kergaravat, she attended school in France and came to this country and to Lenox at the age of sixteen. She became employed at the age of seventeen at the estate of Mrs. Ralph Starks in Lenox where she worked for the next nine years. Mrs. Connelly loved her adopted home town of Lenox where she lived for the past 87 years. She was a proud and loyal US Citizen and Democrat. She and her husband Edward P. Connelly were married in St. Ann’s Church in Lenox on April 10, 1939. Mr. Connelly died February 15, 2001. Survivors include her daughter Margaret C. Rzeznikiewicz and her husband Robert of Pittsfield; one sister Marie Anne Kergaravat of Lenox; grandchildren Maura R. Welch and her sons Ian and Cameron Welch of Westborough, MA, Susan and Gregory Yocum and their children Eryn, Jacob, and Issac Yocum of Westover, WV, Bonnie and Justin Kolba of Pittsburg, PA, and Amy and Michael Romesburg and children Quinn and Harper Romesburg of Waynesburg, PA. Besides her parents and husband she was predeceased by her daughter Paula C. Faddis December 17, 2001, grandson Scott Faddis March 13, 1990, and her sister Lucie Eksuzian February 27, 2015. The funeral of Mrs. Marie F. Connelly of Lenox who died May 28, 2016 will be Thursday, June 2nd at 9 am from the ROCHE FUNERAL HOME followed by a Liturgy of Christian Burial at 10 celebrated by the Rev. Monsignor John J. Bonzagni, Pastor. Burial will follow in St. Ann’s Cemetery. A calling hour at the funeral home will be the morning of the funeral from 8:30 to 9:30. In lieu of flowers donations in her memory may be made to St. Ann’s Cemetery, Elder Services of Berkshire County, or Hospice Care in the Berkshires, all in care of the funeral home, 120 Main Street, Lenox, MA 01240. Mrs. Connelly was truly grateful to the entire staff of KFNCC in Lenox for their dedicated professional and compassionate care.

Marie F. Connelly, 102, died Saturday afternoon at Kimball Farms Nursing Care Center where she had been a patient for the past 9 months. Born in Carhaix-Plouguer, Brittany, France December15, 1913, the daughter of Toussaint M. and Marie Rivoal... View Obituary & Service Information

The family of Mrs Marie F Connelly created this Life Tributes page to make it easy to share your memories.

Send flowers to the Connelly family.