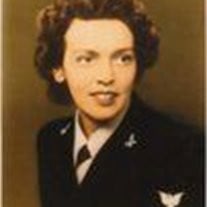 Marguerite E. "Peg" Bulger of Rosebank Drive, Lenox, died peacefully on Sunday, July 1, 2012, after a long illness. Born on Sept. 30, 1918, to Gerald E. and Rheta McQueeney Alling, Peg grew up in New Haven. She served as a Navy WAVE from 1943-1945 and was stationed in Hawaii as a 'gunnery instructor' teaching sightings to gunners with rifles and 50 caliber machine guns. She married the late John C. Bulger in May 1948 and they raised their three children in several states as they followed John's career with General Foods. Peg was the consummate volunteer in all the communities in which they lived. She returned to work as a secretary with Wang and worked herself into management, ending her career with Service Bureau Corporation. Upon retiring, Peg and John moved to the Berkshires to help daughter Kathleen and son-in-law with their new restaurant, the Cork 'n Hearth in 1986. Peg loved serving as hostess and Sunday night bartender, attracting an 'elder' crowd. When the Cleary's purchased The Lamplighter in 2001, Peg helped at the store until age 91. Peg loved to travel, sail, sew, quilt, knit, garden and take trips to Cape Cod. One of her fondest memories was a large family reunion on Cape Cod for her 90th birthday. Peg leaves a son, John Christopher Bulger and his wife Maureen of Nashville, TN; daughter Kathleen and her husband Michael Cleary of Lenox; and daughter MaryLou and her husband Stephen Bullock of Dublin CA. She also leaves her eight cherished grandchildren, Nolan, Megan and Molly Bulger, Daniel, Kevin and Niall Cleary and Chandler and MacKenzie Bullock. FUNERAL NOTICE: A Liturgy of Christian Burial for Mrs. Marguerite E. "Peg" Bulger will be held Friday, July 6, 2012, at 11 a.m. at St. Ann's Church, celebrated by the Rev. Christopher J. Waitekus, pastor. Calling hours at ROCHE FUNERAL HOME will be held Friday morning from 9:30-10:30 am. A luncheon reception at St. Ann's Parish Center will follow burial at St. Ann's Cemetery.

The family of Mrs. Marguerite "Peg" Bulger created this Life Tributes page to make it easy to share your memories.

Send flowers to the Bulger family.