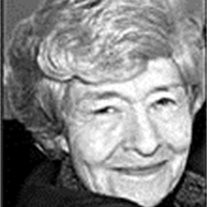 Margaret Hale Sawyer, 86, of Lenox died Friday at Berkshire Medical Center, surrounded by her loving family. Born June 12, 1926 in St. Johnsbury, VTto parents the late Robert Lange Hale and Marion Mathewson Hale of Montpelier, VT. Following high school, she attended LaSalle College in Auburndale, MA earning an Associate Degree in Merchandising and graduated in 1946. She was employed by Lady's Specialty Shops in Boston prior to marrying Edward S. Sawyer, September 18, 1948. A long-time resident of Pittsfield and Richmond, MA, she was member of the Junior League, College Club, Lenox Club and Richmond Congregational Church. She was an active volunteer having served on fund raising efforts by United Community Services, Red Cross, and others. For 20 years she and her husband owned a carefully restored an 18th century colonial farm house working toward preserving the past through furnishing and decorating. She had a keen interest in genealogy and enjoyed tracing her ancestry to immigrants from both Scotland and England in the early 1600's. With family raised, she joined her husband's start-up antique business in 1973 traveling to participate in antique shows throughout New England and the Northeast. She enjoyed home decorating, gardening, and collecting early American antiques and paintings. She recently lived at Kimball Farms in Lenox among old and new friends and was a member of the United Church of Christ - Church on the Hill in Lenox. She leaves her children, Scott W. Sawyer of West Stockbridge and Robert Hale Sawyer, M.D. and his wife, Nancy of Marion, MA and three grandchildren: Laura Elizabeth Lambert and husband, Adam of Middleboro, MA, Ashley Lynn Miller and husband, Chad of Bridgewater, MA and Nicholas Sawyer and wife, Nevena of Edgartown, MA. Her great-grandson, Collin Edward Lambert of Middleboro was her special joy. FUNERAL NOTICE: The funeral of Mrs. Margaret H. Sawyer of Lenox who died November 27, 2015 will be conducted Thursday, December 3rd at 10:30am by the Rev. Richard Chrisman at Church on the Hill. Burial will follow in Richmond Town Cemetery in Richmond. Calling hours at ROCHE FUNERAL HOME will be Wednesday evening from 5 to 7p.m. In lieu of flowers donations in Margaret's memory may be made to Richmond Land Trust or the Church on the Hill, both in care of the funeral home, 120 Main Street, Lenox, MA 01240.

The family of Margaret Hale Sawyer created this Life Tributes page to make it easy to share your memories.

Send flowers to the Sawyer family.