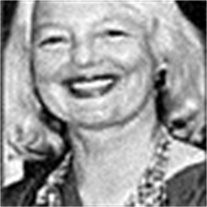 Marcia Beals Brown, a long-time resident of Lenox, MA died Jan. 3rd, 2014 at Mount Carmel Care Center in Lenox following a long battle with Alzheimer's Disease. Born on June 23rd, 1937 in Providence, RI, she was the daughter of the late John E. L. Beals Jr. and Gladys L. Shogren Beals. Marci, as she preferred to be called, spent her early childhood in East Greenwich, RI and at age 13 she and her family moved to Glens Falls, NY where she completed her high school education. She attended the University of Vermont where she was a member of Gamma Phi Beta sorority and graduated with a BS in Home Economics and a minor in Art. It was at UVM where she met her future husband, a student at the University of Vermont Medical School. Following their marriage on June 13th 1959, Marci devoted her talents to several different vocations to support her new husband in the pursuit of his medical career. Her first job was Histology Technician, first in a Burlington, VT hospital, and later at Hartford Hospital in Hartford, CT. This was followed by a position at a New Britain, CT high school teaching Home Economics. Her teaching career was interrupted by the birth of their first child, Geoffrey, to which she adapted by converting space in their small 3rd floor walkup into a combination nursery and studio. Here she launched a flourishing career as a freelance medical illustrator which lasted until the completion of her husband's internship and residency training. There was now a two year obligation to the U.S. Army for her husband, and in 1965 Marci and her young family were assigned to a military hospital and laboratory near Tokyo, Japan. There, she worked in the Department of Entomology producing detailed watercolor drawings of insects which had the potential to transmit malaria and other diseases to our armed forces in Vietnam. An additional responsibility was the 'honor' of making the daily green tea for her 18 fellow, all male, Japanese artists. During her two year stay in Japan, she immersed herself in its culture by traveling throughout the country and taking classes in tea ceremony, flower arranging, origami, bonsai, and the language. Upon Marci's return to the U.S. in 1967, she lived briefly in Stockbridge where her second son, Christopher, was born. The family then moved permanently to Lenox where she would spend the next 46 years of her life. Finally settled, Marci rapidly became involved in numerous endeavors which would become a life-long commitment, namely community service, historic preservation, gardening and landscape design, her beloved horses and ponies, travel, and raising a family. Her smile and personality was infectious to anyone who crossed her path. She never backed down on a cause that she believed to be important in changing Lenox and people's lives for the better. Marci was a member and served as chair of the Lenox Historical Commission for many years. She was instrumental in a completed survey of buildings in the Historic District of Lenox including the Church on the Hill burial ground. She also wrote grants for the placing of the church and other important buildings on the National Register of Historic Places. In 2003, through the efforts of Marci, Preservation Massachusetts designated the few remaining 100 year old Westinghouse crook streetlights in Lenox Village as an Endangered Historic Resource. In 2010, faithful replicas of these historic lights were finally installed throughout the Lenox Village Historic District and on nearby Walker St. She was a charter member and first president for 10 years of the Ventfort Hall Association. She was an active member of this group which saved Ventfort Hall from demolition and continues to oversee its restoration. Marci was a long time member of the Lenox Club, and in the 1980's, together with a few other members, spearheaded a major restoration effort that helped prevent the club's demise. Marci was a life member of and judge for the National Council of State Garden Clubs, a life and board member of The Garden Club Federation of Massachusetts. She was also a member and past president of the Great Barrington Garden Club, a member of the Lenox Garden Club, and chairman of that club's committee that restored Lilac Park in 1990-1994. The time and energy which she devoted to this phase of her life became most apparent in her skill in flower arranging and the design and care exhibited in the gardens of her home. In her later years, after tirelessly and passionately serving as driver and groom for her talented equestrian son, Marci discovered a new love, driving her various ponies and carriages in competitive shows throughout the Northeast. In the early 1990's, she was instrumental in reinstating the annual Lenox Tub Parade, an event in which she participated many times. Marci is survived by her beloved husband of 54 years, Dr. Robert K. Brown, her two sons, Christopher L. Brown of Lenox, and Geoffrey K. Brown and his wife Cynthia, and two grandsons, Hudson and Ethan of Bloomington, IN. She is also survived by her sister Linda B. McCollister and her husband Mark of Cleverdale, NY, and their children David and Debbie and their respective families. The family would like to give special thanks to the nursing staff at Melbourne Place and Mount Carmel Care Center for their wonderful care. FUNERAL NOTICE: In keeping with Marci's wishes, there will be no calling hours or service. A celebration of her life and a private graveside service will be held at a later date to be announced. Donations in Marci's memory may be made to Ventfort Hall Association or the Church on the Hill, both in care of the Roche Funeral Home, 120 Main St. Lenox, MA. 01240.

The family of Marcia Beals Brown created this Life Tributes page to make it easy to share your memories.