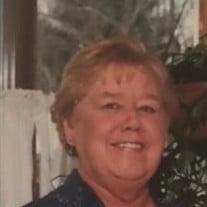 Lynda J. McDarby, 75, of Lenox, died Sunday at Berkshire Medical Center. Born in Pittsfield January 24, 1943, the daughter of Michael and Edna Brittigan Homich, she attended local schools and was a 1961 graduate of the former Williams High School in Stockbridge. After graduation she earned her associates degree from Berkshire Community College, her BA degree at the former North Adams State College (MCLA), and two Masters degrees, one here in the US and the other in Europe. Lynda taught English at Taconic High School in Pittsfield for many years, retiring in 2003. She loved reading, going to the beach, and most of all spending time with her husband, children, and grandchildren. Lynda and her husband Charles E. McDarby were married in St. Mary's Church in Lee June 29, 1973. She is survived by Charles, of Lenox; her two children, Barry Leon McDarby and his wife Heather of Candia, NH, and Shannon Maureen Parry of Lake Ariel, PA; five grandchildren, Zachary McDarby, and Robert, William, Jack, and Emily Parry; one brother, Edward Homich and wife Betty of Pittsfield, and her sister Carol Heading and her husband Wayne of Pittsfield; sister in law Veronica Homich of Folsom, CA; sister in law Judith Petersoli and her husband Paul, and several nieces and nephews. She was predeceased by her two brothers, Richard Homich of Folsom, CA and David Homich of Salem, MA. Following cremation, funeral and burial services will be private and at the convenience of the family. In lieu of flowers donations in Lynda's memory may be made to Valley Veterinarian Services/Stray Animal Fund in care of the ROCHE FUNERAL HOME, 120 Main Street, Lenox. MA 01240.

The family of Mrs Lynda J McDarby created this Life Tributes page to make it easy to share your memories.

Send flowers to the McDarby family.