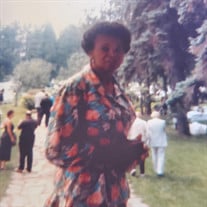 Louise Forbes Pritchett Bronx, NY Louise Forbes Pritchett, 99, of Bruckner Blvd., Bronx, NY, died Oct. 8th, 2021, at NYU Langone Medical Center in Manhattan. Born in Tortola, British Virgin Islands, March 30, 1922, the daughter of Reginald Forbes and Estella Henly Forbes. Before emigrating to New York City, Louise spent time working in St. Thomas, U.S. Virgin Islands. She made her way to New York from there and made her home in the Bronx. She fulfilled the requirements to become an American citizen and on August 15, 1946. she appeared at the U.S. District Court in NYC and was enormously proud to be an American. She found work at the cosmetic factory, Nestle-Lemur; where she became an influence in union activities. Her activism did not stop there. After her second son was born, Louise moved to a co-op in a better location and became involved in board matters. As a result, she became more active in the community. That co-op was her residence for sixty years until her passing. Additionally, she paved the way for other family members to emigrate by providing food and shelter until they found work; eventually becoming productive citizens. As a single parent with a limited formal education and resources, she raised two sons, Dr. Cynaro Pritchett and Marcus D. Pritchett She made sure both boys participated in the normal activities of childhood, which included but not limited to, music lessons. She supported her son, Cynaro, through medical school and Marcus through college. Through her own example she taught her sons to be aware of the needs of others. When Louise’s son’s high school closed (during his junior year) a lot of the parents from the school felt it important enough for A. Michael DeSisto, an educator, to start his own school. A campus was procured in Stockbridge, MA. Soon after that Louise was asked to become a parent liaison. A position she would only accept as a volunteer; she wanted to retain her independence and integrity. It was in this position she found her second calling in life. She counseled many families for over thirty years and many more over her lifetime. When the school closed in 2005, a group of parents came together (again) and asked her to continue her work as a mentor for them. Although a lot of her of work occurred primarily on the phone, she met monthly in person at a space provided by Congregation Emanu-El in Manhattan and several times a year at the DeSisto campus. After the recent pandemic she continued all meetings by phone up until her passing. Through her work she has connected with people all over the world. She did that from her phone in the Bronx. She is held in the highest regard by everyone she has touched. Equally so, Louise was grateful and honored to be allowed intimate access to all the families she has worked with. As such, she was able to find her purpose by being of service to others. A graveside funeral service will be conducted Saturday, October 23, 2021, at 10:30 am in Village Cemetery on Albany Road – Route 41 in West Stockbridge, MA 01266. In Lieu of Flowers, donations in Louise’s memory may be made to Temple Emanu-El. In care of ROCHE FUNERAL HOME, 120 Main St., Lenox, MA 01240 GPS users - Use address of St. Patrick's Church (30 Albany Road - West Stockbridge, MA 01266) Cemetery is a short Distance North of Church on the Right.

The family of Mrs. Louise Forbes Pritchett created this Life Tributes page to make it easy to share your memories.

Send flowers to the Pritchett family.