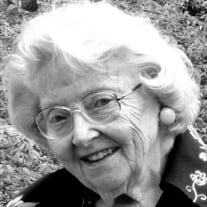 Lois Haines Brown passed away peacefully in her sleep on February 13, 2021. She was born in Worcester, Massachusetts on March 7, 1926. She graduated from high school in Rutland, MA, and matriculated at Boston University, graduating in 1949. Lois loved teaching, and was an educator in West Hartford, CT; Attleboro, MA and Lenox, MA, where she taught in Lenox Dale, Cameron, and Morris schools. She taught art and later became a special education teacher. Throughout her career, she mentored many young teachers. Lois loved teaching so much that after she retired she continued to substitute teach into her 80s. Years after she retired, her former students would recognize her and enfold her in hugs. During the years she took a break from teaching to raise her family, she was still involved with growing young minds as a Girl Scout leader. In 1978, Lois and her husband Harold started to take ballroom dancing lessons at So-Ed at the YMCA, and for years they were active in the social dancing community. They were founding members of The Strictly Ballroom Dancers club, which hosted dances at the Dalton American Legion, where they waltzed away many a night dancing to a live band. An accomplished artist, Lois decorated her home with her many oil paintings. She was an excellent cook, whose apple pie was particularly celebrated. She was devoted to her family, and was close to and well loved by all of the generations that succeeded her. Lois is predeceased by her parents, Paul E. and Alice Haines, and a brother, Paul M. Haines. She is survived by her husband of 63 years, Harold, and daughters Laurel (John) Nolet of Chester, MA; Nancy Holzner of Ithaca, NY; and Paula (Rob) Kennedy of Kissimmee, FL. She also leaves four grandchildren: Nate (Julie) Nolet, Jessi Meagher, Tamsen (Sean Ryan) Conner and Tricia Kennedy, and five great-grandchildren: Michael, Laurel, Gabriel, Everleigh and Imogen. Lois had the pleasure of meeting Imogen for the first time on February 6, and there were smiles all around. She also leaves a sister-in-law who is more like a sister, Kay Cunningham; a brother, Robert (Edna) Haines and many nieces and nephews. Lois and Harold were volunteer docents at Ventfort Hall in Lenox, MA, where they would give tours and Lois would pour during the high teas. They celebrated their 50th wedding anniversary at Ventfort Hall. In lieu of flowers, donations can be made to Ventfort Hall, 104 Walker St., Lenox MA 01240, or to any charity of your choice. There will be no calling hours. The family will hold a private graveside service and celebration of life later this spring.

Lois Haines Brown passed away peacefully in her sleep on February 13, 2021. She was born in Worcester, Massachusetts on March 7, 1926. She graduated from high school in Rutland, MA, and matriculated at Boston University, graduating in 1949. Lois... View Obituary & Service Information

The family of Mrs. Lois H Brown created this Life Tributes page to make it easy to share your memories.

Lois Haines Brown passed away peacefully in her sleep on February...